Guild Hall – All for the Hall

All for the Hall 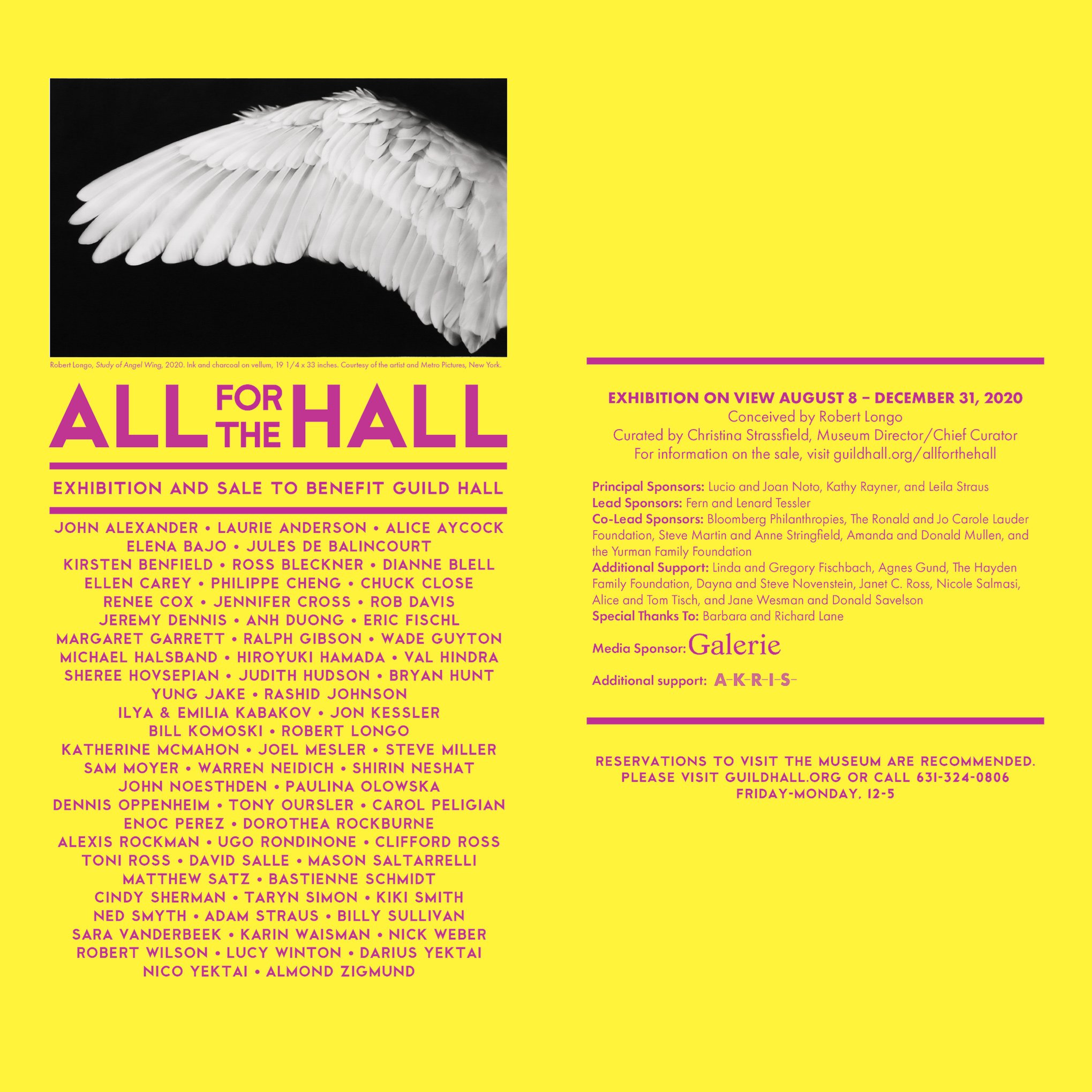 Friday to Monday from 12–5pm

Renowned American artist Robert Longo has mobilized 60 artists to donate artworks for a special benefit exhibition supporting Guild Hall, the historic multidisciplinary center that has long served the artist community of Long Island’s East End. In response to the ongoing impact of the COVID-19 pandemic, All for the Hall includes painting, sculpture, photography and new site-responsive installations by such artists as Laurie Anderson, Philippe Cheng, Jeremy Dennis, Eric Fischl, Rashid Johnson, Shirin Neshat, Enoc Perez, Dorothea Rockburne, Ugo Rondinone, Clifford Ross, Cindy Sherman, Kiki Smith, Karin Waisman, and Robert Wilson, among many others. The museum exhibition will be on view at Guild Hall from August 8 through December 31, 2020, with a corresponding virtual gallery here. All works are available for purchase at accessible price points starting at $500, with all proceeds benefiting Guild Hall.

Prior to the COVID-19 pandemic, Guild Hall had planned a solo exhibition dedicated to Longo this summer. As the scale and impact of this crisis became known and Guild Hall was forced to cancel its annual Summer Gala and Auction, Longo suggested postponing the exhibition and leading this alternative fundraising initiative, alongside Guild Hall’s Museum Director and Chief Curator, Christina Mossaides Strassfield, who is curating the exhibition. The exhibition follows a recent stage fundraiser that was also initiated by the artist community, a virtual staged reading of Same Time, Next Year, directed by Bob Balaban and featuring Alec Baldwin and Julianne Moore.

Since it was founded in 1931, Guild Hall has served as a cultural cornerstone of Long Island’s East End and as a resource for the artist communities that have long existed in the Hamptons. The benefit exhibition reflects the commitment and long-standing relationship between the center and area artists that has developed over the years. The artists featured in All for the Hall include internationally renowned artists as well as those with local acclaim, united by their personal connections to East End, having lived, worked, or consistently visited the region.

To ensure the health and safety of its visitors in response to the COVID-19 pandemic, Guild Hall has instituted the following measures:

All Museum Programming supported in part by The Melville Straus Family Endowment, The Michael Lynne Museum Endowment, Crozier Fine Arts, The Lorenzo and Mary Woodhouse Trust, an anonymous donor, and public funds provided by New York State Council on the Arts with the support of Governor Andrew M. Cuomo and the New York State Legislature