Woody Allen’s Zelig brings up a lot of issues of realism vs fabrication. It seems that using every available method of convincing the audience that the film is real, through mixing fabricated video with historical video, copying the narrator from an earlier time, and using a visual style similar to the early 1900s, Zelig is able to create a fake history.

As someone who approached this film being unfamiliar with Woody Allen and having a more naturally believing attitude, this film demonstrates how seemingly easy it is to create a fake history that is totally believable. One of the more convincing methods is by mocking how documentaries are made today. The movie begins with contemporary people saying thing such as “I cant believe that this person has been forgotten in history despite his importance” – which creates a complex lie. They are lying about a lie.

If this movie has had any influence on my own work and what I would want to try, it would be trying to place my fake images among real history. Such as taking completely fake news stories and putting them in a magazine with real stories. We regard popular news media as truthful, so this method that was used in Zelig would work here also. The idea that you can pass anything off as true if it is embedded in a newspaper or magazine is powerful – and it was apparent that Zelig worked closely with the newspapers to make his story seem more real. 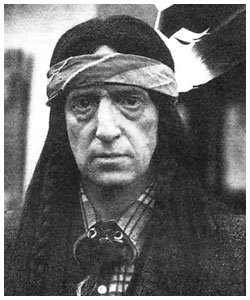 The thing I wonder most, though, is that Woody Allen chose to humorously go over the top with some of the scenes – to give away the whole act. Perhaps this was done in order to reveal the duality between the news and fabrication? That if the news media tried with just a little effort, it could easily convince you of something ridiculous, where as Zelig has to go far out of it’s way (a man walking up a wall) to point this out.