The whale fishery of eastern Long Island was initially developed by Native Americans in the Woodland Period of 1,000 – 1,640 A.D. The Indians hunted whale along the shore with spears, prizing fins and tails for what is interpreted as ceremonial importance.

The Indians taught the first settlers to hunt whale; yet the settlers were quick to understand that the whale’s value lay in oil, not in its parts.

In parts of southern New England and eastern Long Island, whales were identified as pótab (sometimes spelled póttap) in the traditional Algonquian language.1]

The whale was considered to be the “gift of Moshup,” the giant spiritual being who lived on Cape Cod.

According to Mohegan tradition, he was the husband of “Granny Squannit,” the head of the “Little People” of the woods.2

The settlers of Southampton introduced “harping iron” or metal-tipped harpoon which allowed the Shinnecock Indians to catch more whales. Robert Bond, the local blacksmith, became very adept at making these irons and began to sell them to the Shinnecock. This pleased the whaling businessmen in town, but the rest of the colonists felt uneasy. The Shinnecock were friendly neighbors, but the colonists, fearful of the Pequots, sought to end the practice of selling the Indians lethal weapons. Placing the general welfare of the town ahead of economic interests, the town leaders ordered on June 9, 1643 that “Robert Bond shall not make for any Indian or Indians any harping Irons or fishing Irons which are known to be dangerous weapons to offende the English.” 3

The Shinnecock would have been provided with twenty-eight to thirty-foot cedar boats with oak ribs, iron harpoons, and other whaling tools.4

“During the next two decades, the owners paid the Indians with such trade goods as coats, cloth, boots, stockings, powder, shot, and alcohol. The bargaining power of the Indians and the importance of the whaling industry are underscored by the willingness of the colonial authorities to except whaling company owners from the laws prohibiting the sale of ammunition and alcohol to the Indians.” 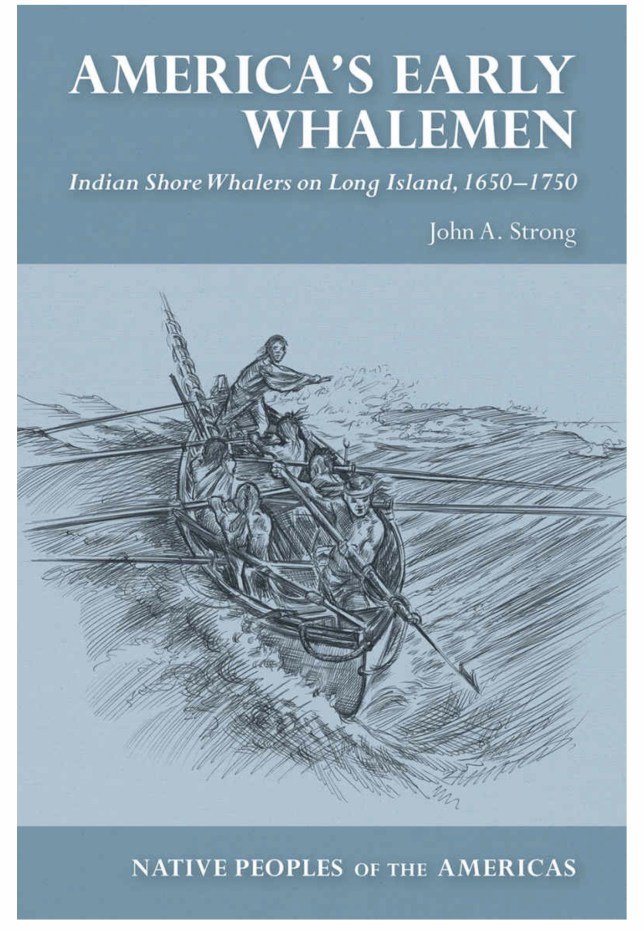 Above: Interview with the author of America’s Early Whalemen, Dr. John Strong. University of Arizona Press.

David Gardiner reports that the Powawas, priests, or medicine men always had thanksgiving feasts for whales, fins, and tails as they were especially important and the meat was a delicacy.6

The whaling era declined in the mid-nineteenth century, when alternative fuel sources affected the demand for blubber and sperm oil.7 Most laborers who relied on whaling to sustain their households were forced to find work elsewhere, but a number of Native Americans from eastern Long Island remained employed in whaling.

Organized whaling began only a few miles from Sag Harbor, in Southampton, in 1644. An order that the town be divided into four wards, and that men from each ward be responsible for trying the whales cast up by the sea, was passed in 1644. 9 Long Island farmers continued to make a profit from shore whaling during the next seventy years.10 During this period, whaling emerged from an off-season exercise for farmers to a legitimate business venture. By 1687, seven companies were whaling from both East Hampton and Southampton, indicating that whaling had become a profitable investment .11

The intensified whaling activity forced the whale pods to avoid the Long Island coast. In order to pursue whale, the hunts were further out to sea. These longer voyages required larger vessels and the development of eastern Long Island’s only good port, Sag Harbor.

Seafaring activities dominated the growth and development of Long Island’s economy, specifically in Sag Harbor, through the eighteenth century.  In the early nineteenth century, the Sag Harbor’s involvement in the whaling industry led the population to wealth and prosperity, ranking third behind Nantucket and New Bedford in men and finances engaged in the trade. Most activity of the village served the port activities, including shipbuilding, coopering, sail-making, chandlery, etc., until the decline of whaling in the early 1870s.

The architectural inheritance from this period is rich in settlement, Georgian, Federal and Greek Revival buildings, many of them residences built by families made wealthy by the whaling industry. Much of the commercial heritage of the whaling industry has been destroyed by a series of nineteenth century fires, which devastated the waterfront areas.

Decline in the whaling industry led village residents to seek alternative industries – many were tried, and a few flourished, leaving a small inheritance of industrial complexes and related residential development from the late nineteenth century. 12

During the early colonial period, Indian whalers asked primarily for gills of gunpowder and shot, as well as corn, tobacco, cloth, shoes, coats, knives, and rum.

One 1670 contract included three coats, shoes, shoe, and several other items for three years of whaling.

Starting in 1676, Indian whalers demanded a share of oil and bone profits as well.13