Sweat Lodges are temporary structures used for ceremonial purposes, used widely throughout North American indigenous tribes. Pre-historic lodges are normally found along water edges as a component used at the end of the ceremony. Stone cobbles are normally found in the center enclosed by a circle of stones on the outside.

It is believed that the sweat lodge ceremony purges the body of evil spirits.

In more recent times, the sweat is done for the communal healing of another. A participant, or the group of participants, would dedicate a sweat to a sick or recovering individual, enduring the pain from the heat to reduce the pain of others in their thought.1

At West Woods, the Shinnecock people also use the sweat lodge as an initiation ceremony for younger tribal members transitioning into adulthood.

Some colonial reports indicate that the Lenapes on western Long Island used the sweat lodge for routine bathing and relaxing as well as for curing.2 According to the account written by Heckewelder3, the Lenape men went into the sweat ldoge weekly, and the women also used it regularly, but less often than the men. When the sweat lodge was heated, said HEckewlder, “a public cryer going his rounds, calls out Pimok! go to sweat.”

David De Vries wrote, “When they wish to cleanse themselves of their foulness, they go into the sweat ldoge until they sweat profusely and then they rush out and jump into a cold stream, then they become entirely clean and are more attractive than ever”4. The sweat lodge was also used simply to relax and relieve minor aches and pains5. A Dutch observer reported that the Lenapes were “remarkably addicted to the use of sweating baths”6

The sweat lodges were heated with hot stones, usually piled in the center. The stones were either carried in from a large fire outside or were heated in a fire inside the lodge. In the latter case, the smoking embers had to be removed before the ceremony began. Water is then sprinkled on the stones releasing clouds of steam.

Often the participants drank a mix of herbal diaphoretics to induce more profuse sweating.7 Many such plants have been identified by ethnobotanists. Tea brewed from the leafy twigs of the eastern hemlock Tsuga canadensis8 and the root of the spotted coralroot Corallorhiza maculata9 induce very heavy sweating.

At least thirty other plants, all available on Long Island, can be used to include the flow of sweat. Some of the more common ones include sweet goldenrod (Solidago odora), boneset (Eupatorium perfoliatum), marsh-mari-gold (Caltha palustris), milkweed (Asclepias syriaca), yarrow (Achillea millefolium), catnip (Nepetic cataria), and horsemint (Monad punctata).

During the troubles at Wounded Knee in 1973, two young Shinnecock women, Margo Thunder Bird and her niece Rebecca Hill went to South Dakota where they met Leonard Crow Dog, a Sioux Shaman, one of the faith keepers for the AIM leaders. Crow Dog encouraged the women to revive their ancient traditions on the Shinnecock Reservation, told them how to build a sweat lodge, and taught them the appropriate rituals. Upon their return, they build a sweat lodge and revived the ancient sweat rituals. Since that time, several sweat lodges have been constructed on the reservation.11 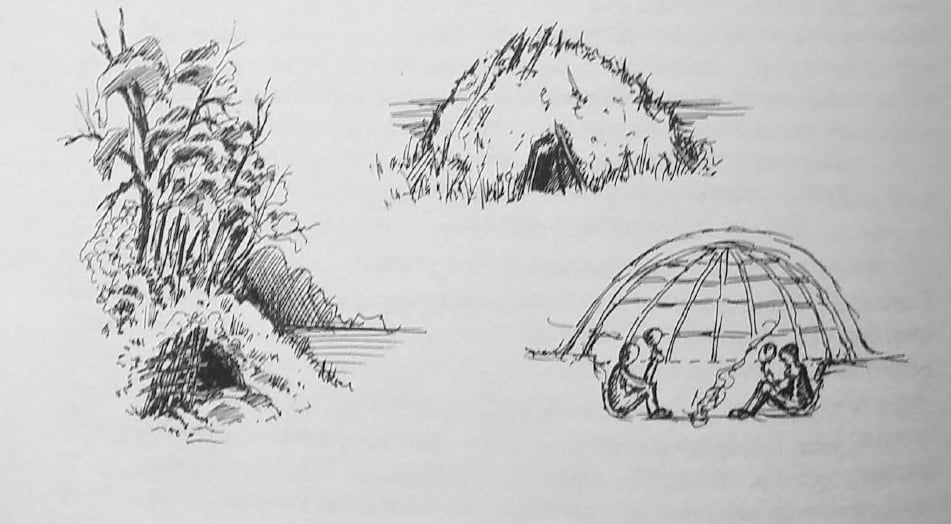 Sweat Lodge from John Strong’s The Algonquian Peoples of Long Island from Earliest Times to 1700 pp. 128

The nature of the ceremonies conducted in the sweat lodge is not as well documented for southern New England and Long Island, but we do have several reports by seventeenth-century European observers.

Another favorite remedy was the sweat lodge. A small hut was sealed with clay and heated by the introduction of hot stones from a fire outside. The patient sat in the hut and sweated until he could stand it no longer. The ritual was completed by running from the lodge and jumping into a stream or having cold water poured over him by his fellow villagers.

Colonial observers identified five different types2 of sweat lodge construction, but there were undoubtedly other variations as well13.

Known as the last building with direct connection

The Stephen Talkhouse Pharoah house was used by Ph

The Stony Brook Site is a prehistoric Indian Villa

In 1649, Phoebe Halsey was murdered by Indians in