Fall is the time for giving thanks, and the Shinnecock community does so twice, gathering to celebrate a tribal thanksgiving, also called Nunnowa, a week before the national Thanksgiving and then celebrating national Thanksgiving Day with the rest of the American country. A midwinter gathering helps stave off winter bores and sadness, and at least one traditional dish of beans and corn is served up hot to drummers and dancers from the community and other tribal nations.1

Each year, Nunnowa is held on the Thursday before national Thanksgiving Day. 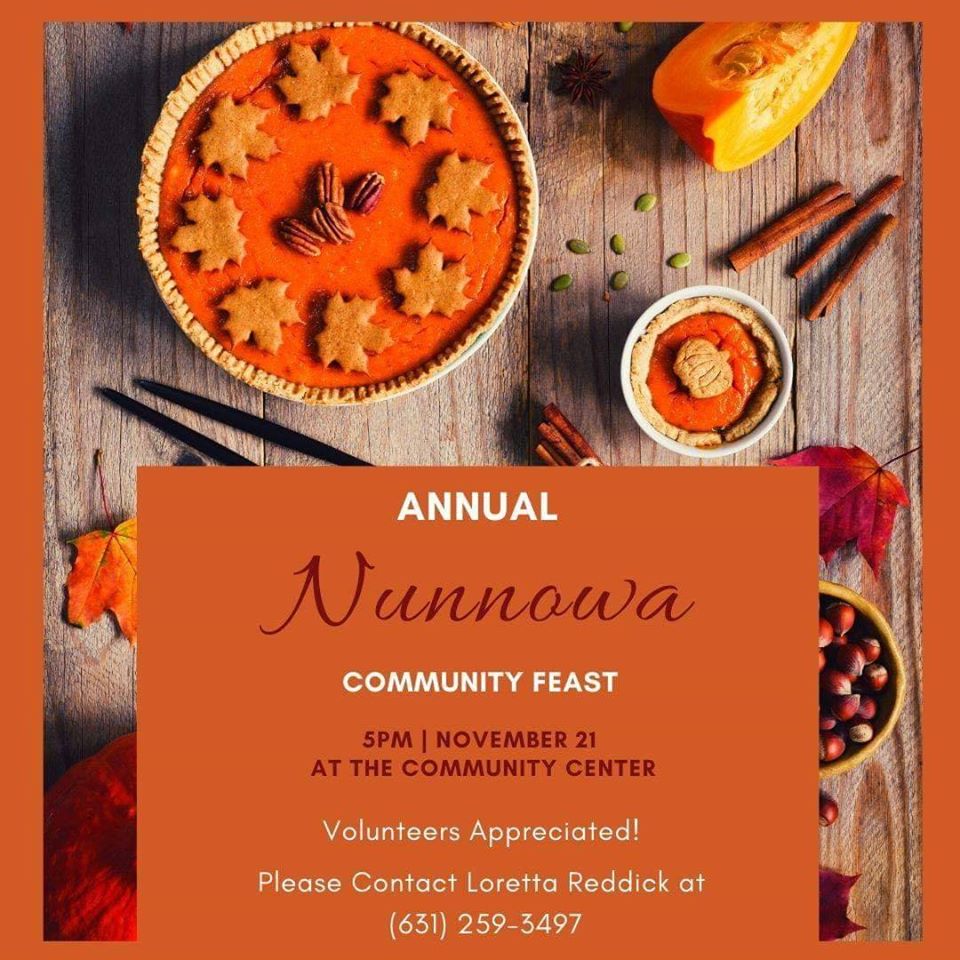 Núnnowa translates to the time of harvest.2

What is Nunnowa? Nunnowa means harvest time. We have come to use this name for the community gathering that was also known as Shinnecock Thanksgiving and Indian Thanksgiving. Held the 3rd Thursday in November, Shinnecock family members gather to eat together celebrating the harvest time with one another.

According to a story passed down from the late Harry K. Williams, who served as a Tribal Trustee for nearly 30 years, the gathering started when a local farmer wanted to honor the Shinnecock Veterans with a dinner. Shinnecock women prepared the food, and in the following years, the gathering continued. It has also been told that many Shinnecock individuals worked for families in town during the American Thanksgiving; thus, their families would gather for their big meal during Nunnowa.

As years passed, the celebration stopped, until the 1970s, the tradition was revived when members of the Shinnecock Native American Cultural Coalition (S.N.A.C.C.) asked to have dinner again. Funded by the Tribe and the Shinnecock Presbyterian Church, it was called Indian Thanksgiving. Foods served included oyster stew, clam chowder, succotash, or samp, followed by turkey, mashed potatoes, yams, baked beans, string beans, rolls, and cranberry sauce. As the meals were enjoyed, Tribal Trustees would speak and often honor tribal members or invited guests. After a dessert of apple or pumpkin pie, tables were pushed aside, and everyone joined in dancing in the middle of the community center.

On Thursday, Nov. 21st, let’s come together to give prayers of thanks for the bountiful harvest of this time of year – Taquonck (fall of the leaf) and celebrate as Shinnecock families with feasting, song and dance and giveaways. Dishes for the traditional food table are welcomed and don’t forget your shawls, dance sticks, and rattles.3

Known as the last building with direct connection

The Stephen Talkhouse Pharoah house was used by Ph

The Stony Brook Site is a prehistoric Indian Villa

In 1649, Phoebe Halsey was murdered by Indians in