The sea and fish have served an important role of sustaining Indian life on Long Island, providing sustenance, occupational opportunities from whaling to wampum manufacturing, and a base for cultural identity.

On Long Island, many archaic period settlements were situated along tidal bays and open waters. Shellfish were and important primary source of protein from that time until the late woodland period.

During the early colonial and contact-period in the 16th century, fishing served as one of the primary commercial enterprises among both colonists and Indian groups of the North East.

Although the Dutch arrived on western Long Island during the early 1630s, it was not until the settlement of Southampton in 1640 that Europeans started using beach and ocean resources along the south shore of Long Island.

Fish and shellfish were routinely used for food and fertilizer.1

During a testimony at the New York State Assembly Hearings (Report of the Special Committee to Investigate the Indian Problem of the State of New York, 1889,) there were indications that the Shinnecock Bay’s shellfish were negatively affected due to an inlet closing, changing salinity levels.

The testimony said the Shinnecock were not able to fish commercially. This led to the Shinnecock becoming hunting guides, tour guides, and decoy-makers.

For the Shinnecock in Southampton, confrontations with state authorities have become routine in recent years. Despite a contract with English settlers dating back to 1648, wherein the Shinnecock reserved their rights to the waters and shores in perpetuity, tribal members have been ticketed for fishing repeatedly over the past 15 years.

The cases, however, are always dropped in court due to the lack of jurisdiction. In addition, Shinnecock tribal member Taobi Silva notes that U.S. code 1948 explicitly requires New York State to honor all previous treaties with Indian tribes with regards to hunting and fishing rights. Silva returned to court on March 19 to continue his fight against a ticket received while exercising his right to harvest eel.2 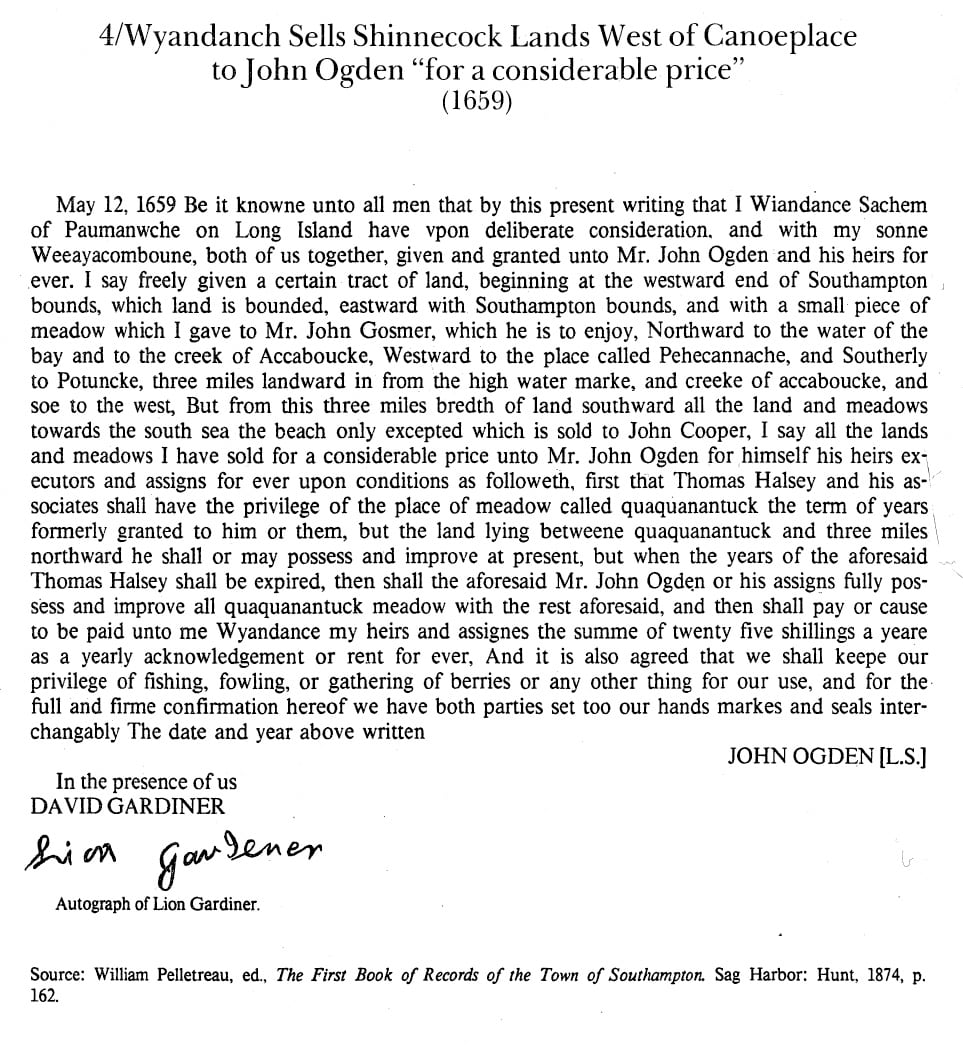 A deed between Wyandanch and John Ogden titled 4/Wyandanch Sells Shinnecock Lands West of Canoeplace to John Ogden “for a considerable price” (1659) includes a clause preserving the privilege of fishing, fowling, and gathering berries or any other resources.3

The Dongan Patent, dating back in 1686, grants all town freeholders access and rights to common underwater land along the shoreline.

The Shinnecock Nation’s 800-acre reservation, which is sovereign land and not subject to zoning codes, thus not under the jurisdiction of the Dongan Patent.4

SOUTHAMPTON, N.Y. — Shinnecock Indians have fished the local waters here on the East End of Long Island since before European settlers first appeared in the 1600s, up through its evolution into the wealthy summer playground known as the Hamptons.

So David Taobi Silva, 42, a tribal member who lives on the reservation just outside of Southampton village, says that when he harvests fish locally, he needs no commercial license from New York State’s Department of Environmental Conservation and is exempt from its strict regulations to protect fish populations.

But that is not how the state sees it — and the result is a clash between contemporary rules and ancient customs.

Two Environmental Conservation officers got a tip last year that Mr. Silva had stretched a long net in a creek off the reservation. They found him at night harvesting an elusive and valuable catch: the nearly invisible tiny eels that wriggle into the headwaters of local bays along the Atlantic coast for several weeks each spring.

These toothpick-size eels, also called elvers or glass eels for their translucent bodies, can bring staggering prices in Asian markets, up to $2,500 per pound in a peak market.

They are illegal to harvest in New York, a regulation state officials call vital in protecting a depleted population. But Mr. Silva told the officers that he was free to gather the eels, citing an aboriginal right to fish locally that is based on Shinnecock tradition and ancient treaties that predate and supersede government laws.

“We’ve been fishing here forever, so it’s hard for me to understand that it has suddenly become illegal for Shinnecock people,” said Mr. Silva, who was nevertheless charged with illegally harvesting the eels.

The officers seized his nets. And though the several hundred tiny eels added up to perhaps a fistful, they were still worth $500, said Mr. Silva, who now faces possible fines that could exceed $80,000.

The baby eels are rarely encountered on Long Island, and along the East Coast they are considered a prize for black market poachers looking for a lucrative haul. The eels have sparked a gold rush hysteria and a related reality show in Maine, which has restricted catch quotas.

In 2016, federal and state agents conducted a four-year investigation they called “Operation Broken Glass,” and charged dealers and fishermen across several Atlantic states with trafficking nearly $2 million in elvers, which are flown live to Asian aquaculture companies and raised for use as seafood delicacies (sushi and sashimi).

Major Scott Florence, of the Department of Environmental Conservation’s law enforcement division, said the state’s fishing regulations apply to anyone fishing in state waters, including Native Americans fishing outside reservation property. He added that the agency “does not dispute that they maintain sovereign jurisdiction over fishing within reservation boundaries.”

But Mr. Silva said he hopes to establish during his upcoming trial in Southampton Town Court that state regulations are overruled by federal law mandating that pre-existing treaties should be honored to ensure hunting and fishing rights for Native Americans, even on nonterritorial lands.

One is a 1648 deed for the sale of East Hampton from the Shinnecock and three other tribes — payment included 20 coats, 24 looking glasses, 24 hoes, 24 hatchets, 24 knives and 100 mugs — to early British settlers. The deed stipulates that the tribes retain the right “freely to fish in any or all the cricks and ponds” and “reserve libertie to fish in all convenient places.”

Mr. Silva plans on citing cases in which local courts have recognized Shinnecock fishermen’s exemption from state regulations, and federal cases in which Indian treaties were deemed to have superseded state laws.

Native fishing rights and harvesting elvers is also an issue for members of the Unkechaug Nation, which occupies the Poospatuck Indian Reservation, 25 miles west of the Shinnecock reservation.

State enforcement officers caught a group of eight Indian fishermen harvesting thousands of dollars in elvers one night in 2014 from a creek near the Poospatuck reservation and charged them with felonies, which were later reduced to violation charges in guilty plea deals.

The Unkechaug’s chief, Harry Wallace, claimed that the men were fishing legally because he issued them permits to fish in the waters off the reservation.

The group that was cited included Frederick J. Moore III, a former chief of the Passamaquoddy tribe in Maine, which has negotiated with their state authorities to gain access to elver fisheries. Mr. Moore was invited by Chief Wallace to help them develop an elver management plan to both harvest and preserve the local eels.

Chief Wallace criticized state officials for refusing to meet with him to discuss fishing rights, which are “our history, our culture and part of our everyday existence.”

“We have a better system of regulating fish than the state does,” he said. “But this is about power and controlling and decimating our way of life.”

On the reservation recently, Mr. Silva showed his eeling equipment, including finely woven nets and large containers that are needed to keep eels alive before shipment to Asia.

Finding and catching the eels requires a perfect confluence of weather conditions as they are swept in on nighttime spring tides from the Atlantic Ocean into freshwater waterways along the coast, he said.

Mr. Silva often searches waterways abutting the reservation, with meager Indian homes lining one shoreline and lavish Southampton mansions on the other.

He has swooped up thousands of dollars worth of elvers in an hour, he said, but only after countless hours fruitlessly searching locations at various times and tides, along with his uncle, Jonathan Smith, who owns a smoke shop on the reservation that Mr. Silva manages.

Mr. Smith, a tribal medicine man who runs a sweat lodge and raises oysters off his waterfront property on the reservation, said he has clashed with state authorities over the years in connection with harvesting scallops and growing oysters.

Mr. Silva has proposed an eel harvesting operation to leaders of the 1,800-member Shinnecock tribe, which has long sought an economic engine, besides the smoke shops on the reservation that sell discounted, untaxed cigarettes.

The tribe pursued a plan to open a casino, which seemed attainable when it finally won federal recognition in 2010, but then stalled amid internal rifts and legal problems.

Mr. Silva and Mr. Smith envision eeling as part of a long-term tribal business plan under which the tribe would sell fishing permits to non-Indian commercial fishermen plying local waters to exempt them from governmental limits, while still maintaining sensible harvesting practices to avoid overfishing.

Mr. Smith said that while the Indians may have long ago handed over most of their land, they retained the right to hunt and fish, by treaty.

“They’re the ones violating the contract,” Mr. Smith said of the state. “They have to get permits from us.”

Kenny Mades, 79, a non-Shinnecock bayman who harvests adult eels in waters near the reservation, said he helped lobby the state to ban baby eel harvesting years ago. He does not believe that the Shinnecocks should be exempt from the regulations that bind him.

“I have 62 fishing licenses and permits between Southampton town and the State of New York,” said Mr. Mades, whose ancestors have harvested fish for 11 generations dating back to the 1650s.

“They might have special rights on the reservation,” he said, “but after all these years, I don’t see why they should have any more rights than me.”5

Wegwagonock was once a large settlement in what is

Freetown was a mixed-race community north of East