The Unkechaug Nation maintains a sovereign relationship with the State of New York, other Indian Nations in the United States and Canada and other foreign powers. The Unkechaug Nation is located on the Poospatuck (“where the waters meet”) Reservation in Long Island, NY.

Under the provisions of colonial laws and later under the New York State Constitution (Article 12) the State of New York formally recognized the Unkechaug Nation of Indians in the 18th century. 1500 acres of land that had been long held by the Unkechaug and that continued from an original land agreement entered into with the King of England and the Unkechaug in the 17th century was set aside for the exclusive use of the Unkechaug. Today, that allotment has been stripped down to 55 acres; nevertheless, the affinity of the people to the land is as strong as in the past, if not even stronger today. The total population of tribal members, families, and extended relations is 450 of which approximately 250 reside on the Poospatuck Reservation. Housing density, and occupancy levels are unacceptable when measured against the rate of population growth and available land as well as the number of tribal members who want to return to their traditional homeland. The Unkechaug are faced with a rate of population growth greater than the national average and an increased demand for tribal services. Housing is an important priority but efforts to expand housing for tribal members are blocked by a lack of land. The Unkechaug are committed to increasing the land base in order to meet the needs of their members. 1

As the first English settlers arrived in the 1650s, the tribe occupied several thousand acres in what is now the southern half of the Town of Brookhaven and have a well documented history from prehistoric times to the present. 1

Rev. Azariah Horton is preaching at Shinnecock and Poosepatuck. 2

Rev. Paul Cuffee, of Shinnecock descent, is ordained at the Poosepatuck Reservation. 3

Thomas Jefferson and James Madison visited Poospatuck in 1791 on two separate accounts. Jefferson enlisted the help of Unkechaug women to record a vocabulary of their language. There were also brief accounts of the Unkechaug spring ceremony called June Meeting, but not much more was written about the tribe.

Unkechaug has, over the centuries, often been used interchangeably with “Poospatuck,” the place name for the reservation on Poospatuck Creek. Today, they live on a small reservation along the northern bank of Poospatuck Creek on Long Island in Suffolk County, New York.

The first professional scholar to publish a historical account of the Unkechaug was Ellice Gonzalez. In 1983 the National Park Service, which supervises the Fire Island National Seashore facility that borders the Unkechaug Reservation at Poospatuck funded her research, which traced the Unkechaug history from prehistoric times to 1984. 4

Lone otter publishes My People, The Unkechaug at Kiva Press in Holland, though not widely circulated and currently out of print.

Chief Harry Wallace of the Unkechaug, with expert witness Professor John String of Southampton College, represents the tribe in the Gristede’s Foods v .Poospatuck Nation federal civic court case – charging that the Unkechaugs had engaged in unauthorized sale of untaxed tobacco products over the internet, telemarketing, and printing ads.

The case was dismissed through a compilation of documents tracing the Unkechaug history from prehistoric time until 2009 by Professor John Strong which later became the material for The Unkechaug Indians of Eastern Long Island, A history by John Strong, 2011.

The case also demonstrated the criterias for common law federal recognition for the tribe, though the Unkechaug are still only State Federally Recognized. 5

Bernice Guillaume contributed important studies of the Poospatuck School (1991) and the role of Unkechaug women (1998).

In exchange for reconfirming previous land deeds between the Unkechaug and colonist Colonel William Tangier Smith, Smith granted in perpetuity one hundred and seventy-five acres of land to the tribe on Mastic Neck.

The grant stated that the Unkechaug, “their children and the posterity of their children forever shall without molestation from me or my heirs or assigns shall and may plant and sowe forever” and added that the Indians could not sell, convey, or alienate this planting right or any part thereof to any persons whatsoever.

The bounds of the deed were unfortunately blurred, and the Unkechaug now only retain fifty of the original one hundred and seventy-five acres, including the tract of the historic William Floyd Estate. Unkechaug people are recorded as living on the estate during the early 1700s and later archaeological reports confirm wigwam and planting grounds.

Unkechaug translates to people from beyond the hill.

The language spoken on Long Island and in southern New England are all part of the Eastern Algonquian language family. 1 The Unkechaug language, for example, shares a vowel pattern with such northern New England languages asAbenaki and Micmac. 2

Thomas Jefferson collected the most extensive surviving vocabulary taken directly from Unkechaug speakers during a visit in 1791. 3 Three other fragments of the language were recorded from native Unkechaug informants.

Of Jefferson’s 202 words, there were only eleven verbs, the rest being nouns and numbers. The nouns included names of animals, plants, parts of the human body, gender, natural phenomena, religion and geographic features.

In 1874, Henry Clinton visited the Unkechaug Reservation and spoke to an unidentified Unkechaug of fifty years old. He recorded;

In 1903, Mesh (moses) Bradley, an Unkechaug elder, repeated the words for snake and turtle to archaeologist Mark Harrington as he was excavating a village site near the Shinnecock Reservation. 4

In 1932, a year before passing, Martha Maynes, an elderly Unkechaug woman, gave several words to Frank Siebert Jr, however Siebert published only one of these words; 5 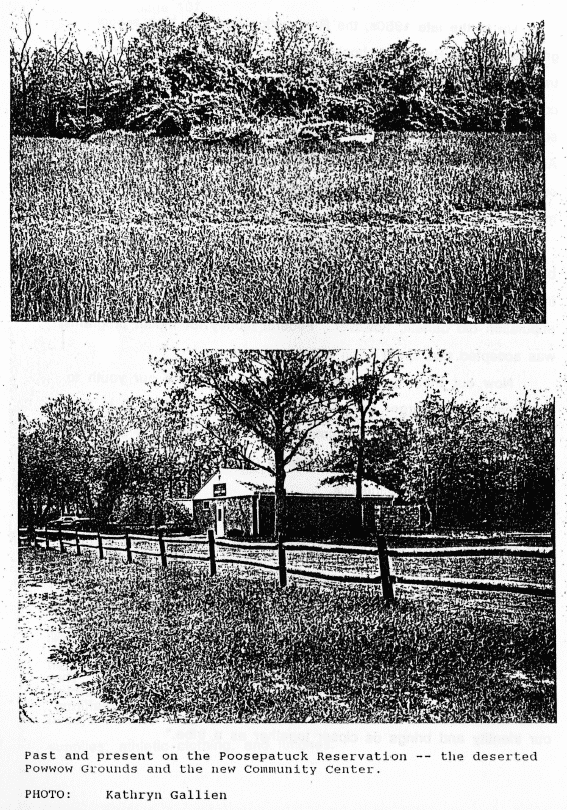 Chief Lone Otter of the Unkechaug wrote in his book Turtle People regarding the importance of the community center 1;

A very important project in rallying our people has been our new Community Center, dedicated September 9, 1986. I wrote these words for that great event:

“Our Reservation, although small — only 52 acres — has come a long way. Today the community thrives by utilizing the benefits of the political system. Our aspirations are high, but our goal remains the same, that is, to maintain our identity as Native Americans. The completion of our Community Center is the focal point. It reaffirms our identity and brings us closer together as a tribe.”

The Unkechaug Indian Nation petitioned to become part of the Indian school system of New York State based on legislature passed in 1804 and April 30, 1846 for Indian education. The establishment of the school at Poospatuck was fiercely opposed by the Floyd family. 1 The Floyd family understood that involvement by the state in the education of the Unkechaug represented a fundamental acknowledgment of the tribal existence and community rights of the Unkechaug nation and thus a limiting of the family’s unilateral control of the Indians which had gone on for generations. The 19th-century legislature sought to facilitate civilization among the Indians was a means for the state to manage Indians affairs independent of the federal government and reflected the national policy of cultural assimilation across the United States. 2

Poospatuck had various spellings in land transactions, but one variation may have been Qualican, described in William Wallace Tooker‘s Indian Place Names on Long Island:

a locality on Mastic Neck, Brookhaven Town. Mentioned in Wm. Smith’s deed to Indian as Pusspa’tok in 1700, viz.: “and ten akers at Qualican” (B.H. R., vol. i., p. 91). This name is perhaps the equivalent of the Delaware q’sahican, “to measure” (q’sahi “measure it”); Chippewa dibaigan, “measure.”

So-called because it was the land “measured” or “laid out” for the Indians’ use. 1