Once a Native American hunting and fishing ground, Sylvester Manor has since 1652 been home to eleven generation of its original European settler family with a long intact history of America’s evolving tastes, economies, multi-cultural interaction, and landscapes.

Sylvester Manor is a house first constructed c. 1652 for Nathaniel and Grizzell Sylvester, their eleven children, and likely several slaves and indentured servants. This original house remained intact until c. 1737, until Nathaniel’s grandson, Brinley Sylvester, rebuilt the residence close to the same location.

Today, the house and acreage are known as the Sylvester Manor Educational Farm. Their mission is to cultivate, preserve, and share the lands, buildings, and stories inviting new thought about the importance of organic food, culture and place in our daily lives. 1

There is evidence of a large Late PrehistoricHistoric Native American Settlement on what is now Sylvester Manor, showing continuous occupation between AD 1200 and circa 1640. 1

By 1656, the four that purchased Shelter Island was down to three merchants: the Sylvester brothers and Middleton. Nathaniel was the only one to settle on the island. Middleton was appointed navy commissioner at Portsmouth, England in 1664. With this venture, each partner took on a separate area of responsibility; Constant Sylvester oversaw the West Indies supply of manufactured and processed goods; Nathaniel Sylvester’s the New England production of raw materials, while Middleton may have provided the transatlantic shipping. 3

Besides the members of the Sylvester family, the Manhansets also interacted with numerous Quaker visitors, including John Jay, William Edmundson, and George Fox, founder of the Society of Friends.

George Fox arrived on Shelter Island after a three day voyage from Rhode Island and led a meeting with the indigenous inhabitants the following day.

Through a Native American interpreter, Fox led a two hour preaching service to approximately one hundred Manhansets, including the King and his council during his first week on the island.

The Manhansets were described as sitting “down like Friends” 4 and confessed that he spoke the truth. The following Sunday, Fox again guided a large gathering for the Manhansets, which may have possibly included the African residents of Shelter Island.

Before Fox’s departure, meetings were arranged with the Manhansets for every two weeks and Joshua Sylvester, Nathaniel Sylvester’s brother, was scheduled to read Scriptures to them. 5

Perhaps the most intriguing of these appropriated items is an altered silver Spanish cob found in a South Lawn midden.

Cobs were expediently minted coins produced for ease of transportation, often from South America, and were clipped down to obtain silver or later melted down in order to be made into formal coinage. The example from Sylvester Manor has been extensively clipped with the majority of its original markings obscured by wear. Dating this coin has proven difficult due to the amount of wear but the visible markings appear similar to cobs produced during the reign of Phillip IV (1621–1665).

What makes this coin particularly unique are the hand etched designs applied to both sides of the object. A cross or X has been marked in the corner of the obverse while a Native American etching of a Thunderbird design has been placed in the opposite corner on the reverse.

Both marks fall within areas where original markings have been worn completely smooth, perhaps done intentionally to provide a blank space or platform for the etchings.

A second object, a smooth quartzite cobble also found in the South Lawn in Unit A-7, bears a strikingly similar Thunderbird inscription. The similarity suggests that both objects may have been created by the same hand and at the least indicates a continuation of traditional Native American symbolic practice in Sylvester Manor’s 17th-century colonial contexts.

The thunderbird design has been found in various pre-contact contexts in Southern New England, often in the form of petroglyphs and amulets (Bragdon 1996: 208), and may have been the representation of a deity recognized as far north as Maine and as far west as the Great Lakes. 1 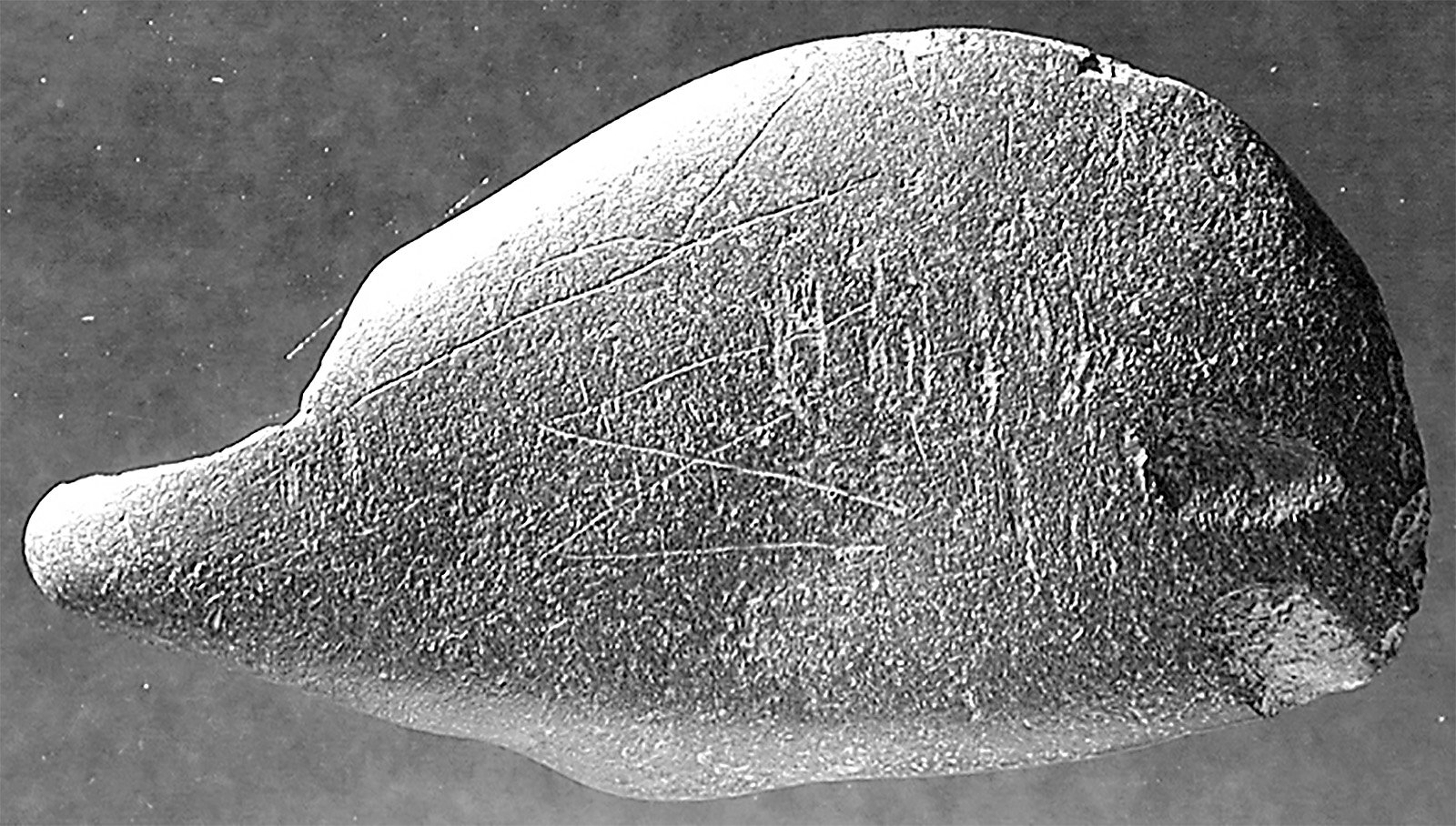 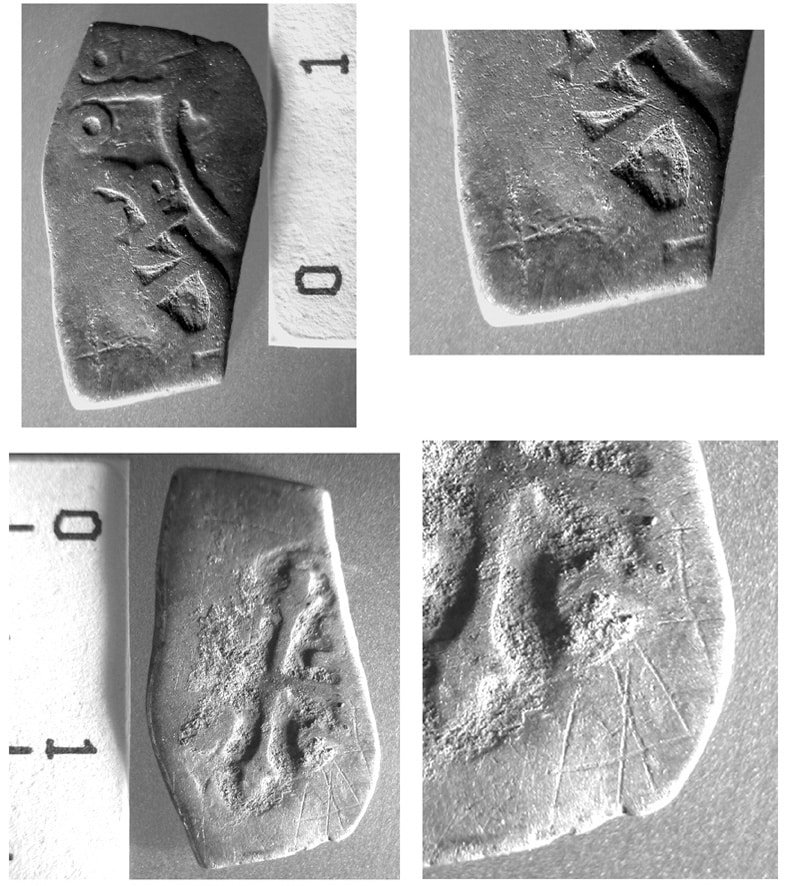 In 1829, a new proprietor of the Manor, Samuel Smith Gardiner (albeit still a descendant of Nathaniel and Grissell Sylvester) signed an indenture agreement binding Isaac Pharoah, a five-year-old Montaukett child of Easthampton, to service until his twenty-first birthday (SMA Group III-A, Indenture – Isaac Pharoah 1829). Isaac remained there for the rest of his life.

Isaac Pharaoh, known to the family as “the last of the Royal family of the Chief of the Montauks” and as a servant to them for nearly his entire life. Whether Isaac was in fact descended from Wyandanch himself, it should not have escaped notice that the Gardiners had been connected to the Montauketts for a very long time. 1

Isaac’s brother, William, was indentured as well. Some speculate as to whether it was truly William who created the ship etchings on the wall.

These two children clearly had markedly different personalities — Isaac stayed with the Gardiner family for his entire life, for many years after the expiration of his indenture. But William, apparently unwilling to “demean and behave himself as a good and faithful servant should,” ran away to a whaling port and never returned to the Island. 2

The buildings and landscape constructed at Sylvester Manor served as the context for daily interaction between individuals of different cultures and histories.

The most complete example of handled pottery found at Sylvester manor resembles the unquestionable blending of Native American design and European attributes. The whole collar of this bowl is decorated with diagonal incised lines while a portion of a handle is located underneath the collar before expanding into the globular shape. The handle resembles European border-ware and stoneware jugs. The firing style appears to be of African origin, dating to the first colonial generation of 1652-1680.

One question surrounding this object is whether the handles were at all functional. Carbonized organic residue and exterior burning on this vessel suggest that it was at least used for food preparation at some point, however it is questionable if attaching such relatively small handles would work for such low-fired vessels. Whether these handles were meant to be utilitarian or decorative is still up to debate. 1

Nathaniel Sylvester of Shelter Island’s will named 24 people, who are believed to be African, African Caribbean and Indian Americans. Some are listed as husband and wives with their children, however the children are to be separated from their parents by the terms of the will, husband and wives are not. TONY and JAQUERO with their Portuguese names might have come from Portuguese Africa or Brazil. HANNAH and NANNIE are English names. TAMMERO and OYOU were probably Africans from Ghana. SEMNIE—there were two listed; SEMNIE who is married to JAPHET may be an older woman; no dependent children are listed. NANNIE who is married to TONY may be the daughter of SEMNIE, and NANNIE’S child SEMNIE is probably named after the older woman. 2
Giles Sylvester, the son of Nathaniel used an account book listing many of the names from the will, as well as nearly 40 Native Americans that worked for wages, mostly rum at the Sylvester Manor. 3

Many of the same names that appeared in the 1680 will of Nathaniel Sylvester of Shelter Island appear in the Southold Township Census of 1698. 4: 669, 673) & David Martine, History Timeline ]

A segregated cemetery was studied in March 2013 UMass initiated geophysical testing, the most respectful and least invasive initial approach.

Sixty to seventy burials have been tentatively identified in this first attempt. The site may have been an Indian burial sanctuary long before the Sylvesters and Africans arrived—Manhansetts and Montauketts reportedly lie there too. 1

This map is a work-in-progress meant to represent Long Island, New York’s Indigenous history. To learn more about definitive boundaries, contact the tribal nations in question.

The process to populate this map is underway – since 2016, the On This Site map was limited to pins but we are currently migrating all of the locations to this new version. Some icons are missing from before – but you can still see the images and read about the sites by clicking “Browse by Images” in the menu.

Please consider a charitable donation, purchasing a print, purchasing a book, or contributing monthly to keep On This Site going.