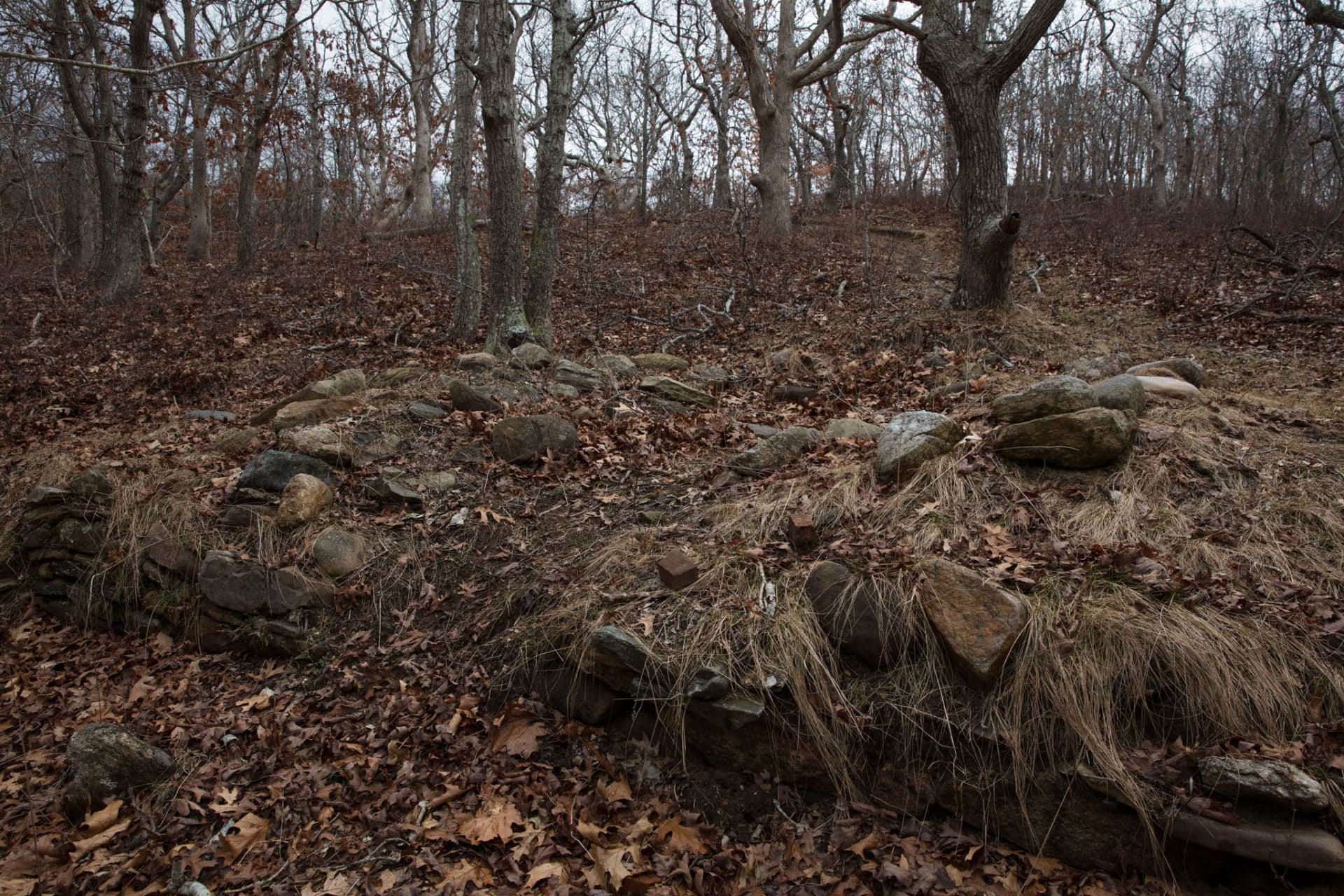 The Stephen Talkhouse Pharoah house was used by Pharoah later in his life. The house featured two “Indian barns” as food storage, and a footpath toward Bridgehampton on it’s edge.

The foundation remains today, but the house may have been a wood cabin during its use.

The foundation stones before you are the remains of what is thought to have been the house of Stephen “Talkhouse” Pharoah, one of the most identifiable, yet most enigmatic, figures in East Hampton history.

The shallow pits to the north of the foundation, known locally as, “Indian barns,” were most likely covered with woven thatch and used for food storage.

A direct descendant of the Montaukett Chief Wyandanch, Stephen was born in Springs in 1819 ( at Molly’s Hill ). As a child, his family sold him into indentured servitude for the sum of forty dollars, one dollar for each pound he weighed. At the age of thirteen he ran away to Sag Harbor where he secured a berth on a whaling ship bound for South Pacific.

In 1849, a ship with him aboard, landed in San Francisco. Lured by the promised riches of the Gold Rush, Stephen spent the next several years panning for gold in California.

How or when he returned to the East Coast is unknown, but during the Civil War he served in the Union Army with the 29th Connecticut Volunteers.

By 1867, Stephen was back on Long Island, where he soon earned the reputation as the fastest walker on the East End, regularly making round trips between Montauk and Bridgehampton in a single day. Residents often paid him to deliver their mail.

Accounts of the walking phenomenon came to the attention of P.T. Barnum, who hired Stephen and promoted him as “The World’s Greatest Walker.” Barnum staged several competitive races featuring Talkhouse, most often pitting Stephen against a horse drawn wagon – a contest which he usually won.

In 1878, Pharoah initiated a lawsuit to secure the property rights to Indian Fields in Montauk for the approximately two hundred remaining members of Montaukett tribe. The battle was short lived.

Stephen succumbed to tuberculosis in 1879. He died while walking along one of his beloved trails. He was laid to rest in Indian Fields Cemetery in Montauk.

Stephen Pharaoh (ca. 1821-1879), also known as Stephen Talkhouse, was born in Northern Springs, New York, a supposed lineal descendant of the great sachem Wyandanch of 1650 through his royal daughter Askickotautup, the wife of Poniute. He apparently was an exceptional person of great ability, admired by all who knew him. He had careers as a whaler, hunter, circus ‘walker’, champion cross-country ‘walker,’ was said to have gone gold hunting in California in 1849, and was a veteran of the Civil War (Co. G, 29th Connecticut Volunteers). He was non-christian, rarely drank, and lived an orderly life.

During his lifetime, he lead the Montaukett Tribe, who at that time lived in scattered wigwams throughout the East Hampton town. Stephen was born in a wigwam, in what was traditionally known as Accabonac, on a site still marked by a historical marker titled “Molly’s Hill,” erected by East Hampton town in 1976.

The town of Easthampton, in a contrary way, took a lot of pride in its Indians and especially in Steve Talkhouse, half-brother of King David Pharaoh.
In 1867, around the age of 48, he was photographed in a studio holding what was likely a walking staff; this photo became his iconic image. This image, along with his job as a mailman who traveled long distances by walking, cemented his legacy. It is not certain who took this photograph, but it is among only a handful of photographs of Talkhouse.

Steve had been indentured as a boy for $40, a dollar for each pound he weighed. He was a striking-looking man, what is considered stereotypical Indian-gaunt cheeks, long face and long hair and long sad eyes. He was billed as King of the Montauks, which he was not, and a great walker, which he was.

Steve’s walking feats were famous. For .25 cents, he would walk twenty-five miles to mail a letter. He won a walking race from Boston to Chicago against fifty others. He is supposed to have walked from Montauk to Brooklyn in a day; a distance of over 100 miles. And this was the year before his death when he was fifty-nine years old.

He was accustomed to walking off to Montauk on his own paths over cliffs, do a day’s work at Easthampton, and walk back home again; the story means nothing unless you’ve driven over the same territory (which takes about an hour in a car). Once, Steve refused a lift in a lighthouse keeper’s carriage (with a fast team) because he said he was in a hurry to get to town.Around the age of 60, he was found dead on one of his paths in 1879. A widower and father, Stephen was called “the last of the Montauks” in funeral notices.

His funeral was held in Freetown, East Hampton, which was once a neighborhood consisting of ex-slaves, indentured servants and Montaukett Indians who were unjustly removed from their homelands east in Indian Fields. His body was taken in solemn procession all the way to Montauk for burial in the ancestral land. He was placed in a grave on a hillside overlooking the eastern shore of Lake Montauk in a pine coffin paid for by the Town of East Hampton and marked by a government military white marble stone provided for veterans – the only burial identifiable in the cemetery. 1

It has been said that Taukus was Stephen’s Native name, which had been bowdlerized as “Talkhouse” 1