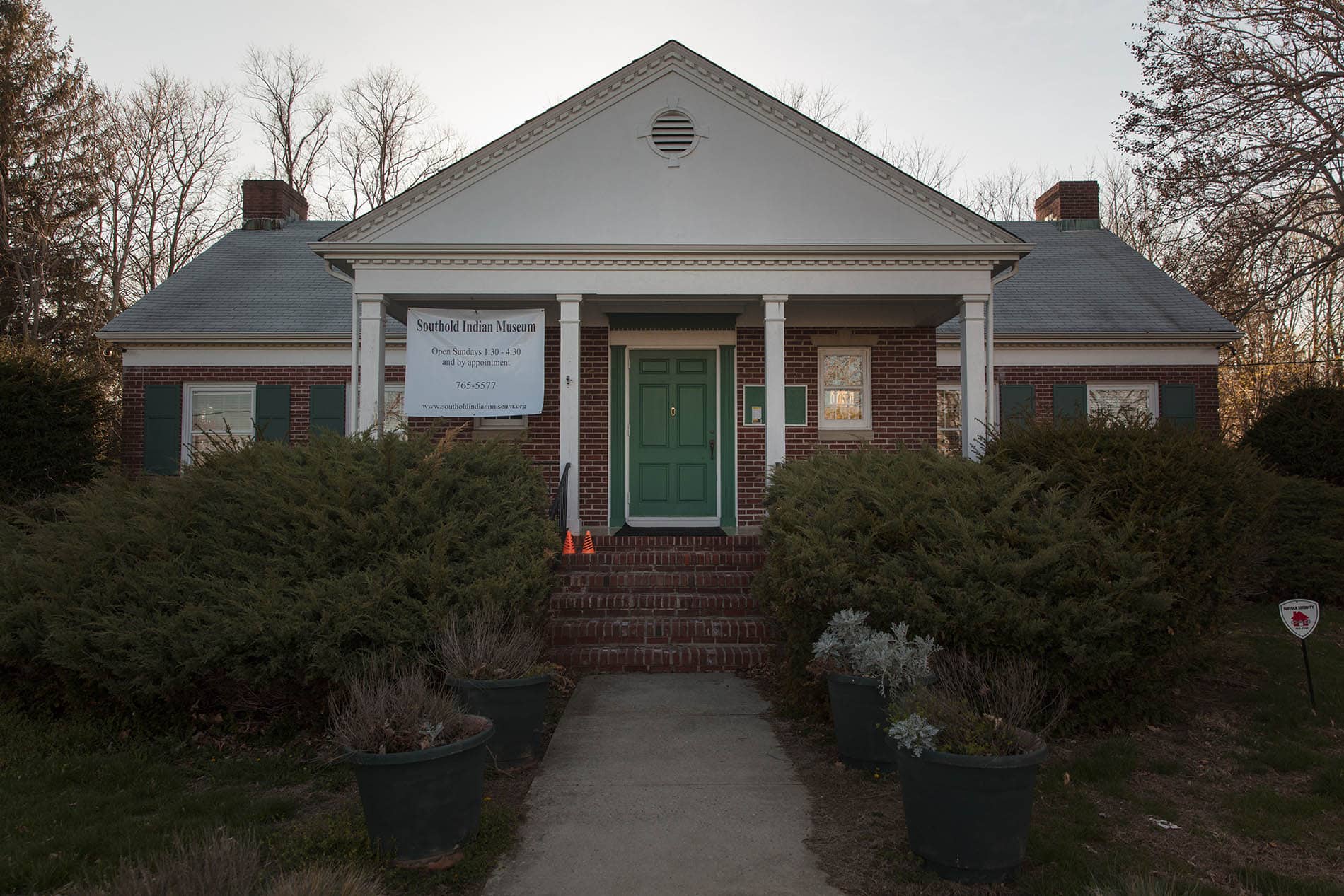 The Southold Indian Museum opened in 1962 with a mission to study surrounding archaeology and natural history. It is owned and operated by the Incorporated Long Island Chapter of the New York State Archaeological Association.1 In 1990, the museum was forced to remove human remains that were on display through the efforts of Shinnecock tribal member David Bunn Martine and local Professor of history John A. Strong. In more recent years, the museum has worked towards repatriating human remains that had been in their collection for decades.

The Southold Indian Museum archaeologists have been leaders in site investigations across Long Island since the 1920’s.  Many important ancient Native American site artifacts are on permanent display at the Museum. 1

Ancient Bones of Native Americans were removed from a display case at the Southold Indian Museum and the museum directors considered giving the remains to members of the Shinnecock Tribe in Southampton for proper burial after hearing the Shinnecock’s objections to the exhibit.

The museums directors’ decision came after David Bunn Martine, a member of the Shinnecock Tribe, protested the display two weeks before, calling it disrespectful to his ancestors. As a result, the windows of the displays were covered with paper a week later after Martine and other Shinnecocks met privately with members of the museum board of directors.

At that time, the board members said they had to consult the museum’s membership before deciding whether or not to give the bones to the Shinnecocks. Martine, who requested that the bones be removed from display and returned to the Shinnecock, said he was willing to settle temporarily for the removal of the display and agreed to wait for the return of the remains.

“I’m waiting until they get ready,” he said after meeting, from which reporters were excluded. “I’m not going to wait too long, I’ll guarantee that.”

Other members of Shinnecock tribe who attended the meeting with the directors were not as patient. The reverend Holly Haile Smith commented that if the museum directors were really as interested in cooperating with Shinnecock as they claimed to be, they would have given the Shinnecocks a commitment that they will return the skeletal remains.

Martine said that in dismantling the exhibit, the museum directors will join the trend of other museum across the country, including the Smithsonian Institute in Washington, D.C., which is now beginning a project to return more than 18,000 bones to Native Americans across the country.

The American Association of Museums has established guidelines for removing displays and returning remains to descendants, according to John Strong, a professor of history at Long Island University’s Southampton Campus who specializes in Native American history and accompanied the Shinnecocks at the Sunday meeting.

“The issue is not law,” Professor Strong said of the Southold Indian Museum’s display. “It’s one of ethnic courtesy.”

“It should be apparent that it’s the proper thing to do,” Martine said of dismantling the displays and returning the remains. “Ancestors on display is kind of a reprehensible thing… It’s an insult to my people. It’s an insult to me personally.”

“You don’t see any WASP (White Anglo Saxon Protestant) bones on display anywhere,” agreed Michael Smith, pastor of the Shinnecock Presbyterian Church. “For me it’s a very simple matter… I can find no legitimate reason whatsoever to display anyone’s bones.”

The display in Southold was intended to show viewers the diseases from which Native Americans suffered that were visible in their skeletal remains, board member Francis O’Connell said after Sunday’s meeting. Shinnecocks who attended the meeting remarked that those diseases would also be visible in the skeletal remains of white men who were buried locally.

The skeletal remains that were on display were unearthed in Montauk and on the North Fork in the early part of the century, according to Walter Smith, president of the Southold Indian Museum. Farmers and builders came upon them in the course of their work and a collection was amassed by a group of residents interested in Long Island’s history.

The group stored the bones in the basement of the Southold Savings Bank, Mr. Smith said, and when the museum opened in the early 1960s, the remains were put on display.

It is unclear why, after the bones have been on display for some 30 years, Native Americans decided two weeks ago to object so strongly to the exhibit. Martine, an artist of Shinnecock and Apache descent who studied at the Institute of American Indian Arts in Sante Fe, New Mexico, said he first protested the display about a year ago. Cynthia Halsey, chairwoman of the museum’s board of directors, said that because he made no formal request at that time for the removal of the display, the board did not respond.

Martine said he didn’t know why others hadn’t objected before not, but “it’s gone too many years without a challenge,” he said of the exhibit.

Reverend Michael Smith suggested that the Shinnecock were objecting now because “it’s an issue that has surfaced in Indian communities throughout the United States.” Shinnecocks recently have been reminded of their roots with the discovery of the old fort and ceremonial site in Shinnecock Hills, alleged desecration of the burial grounds on Sugar Loaf Hill, and the 350th anniversary of the year when white men settled in Southampton Town and began affecting the traditional Shinnecock way of life.

Although the remains are probably those of Montaukett and Corchaug Indians – not Shinnecock – Long Island tribes were so interconnected that there is probably a kinship between the ancestors in the display case and the people who objected to the exhibit, Professor Strong said. Long Island Indian groups were named by where they lived and many groups, including the Shinnecock, married members of other local groups, Professor Strong said.

While Martine fielded questions from reporters after Sunday’s meeting, Gustavo Raven Silva, an apprentice medicine man of mixed descent living with the Shinnecock, burned sage and sprinkled raw tobacco in the display case, offering a prayer for the dead. He later explained that the brief ceremony soothed the spirits, who were unhappy that the remains were on exhibit instead of buried. He said he asked for blessings for the Native american ancestors and members of the museum board who had been receptive to the Shinnecock on Sunday and who he hoped would continue to be sensitive to their concerns. 2