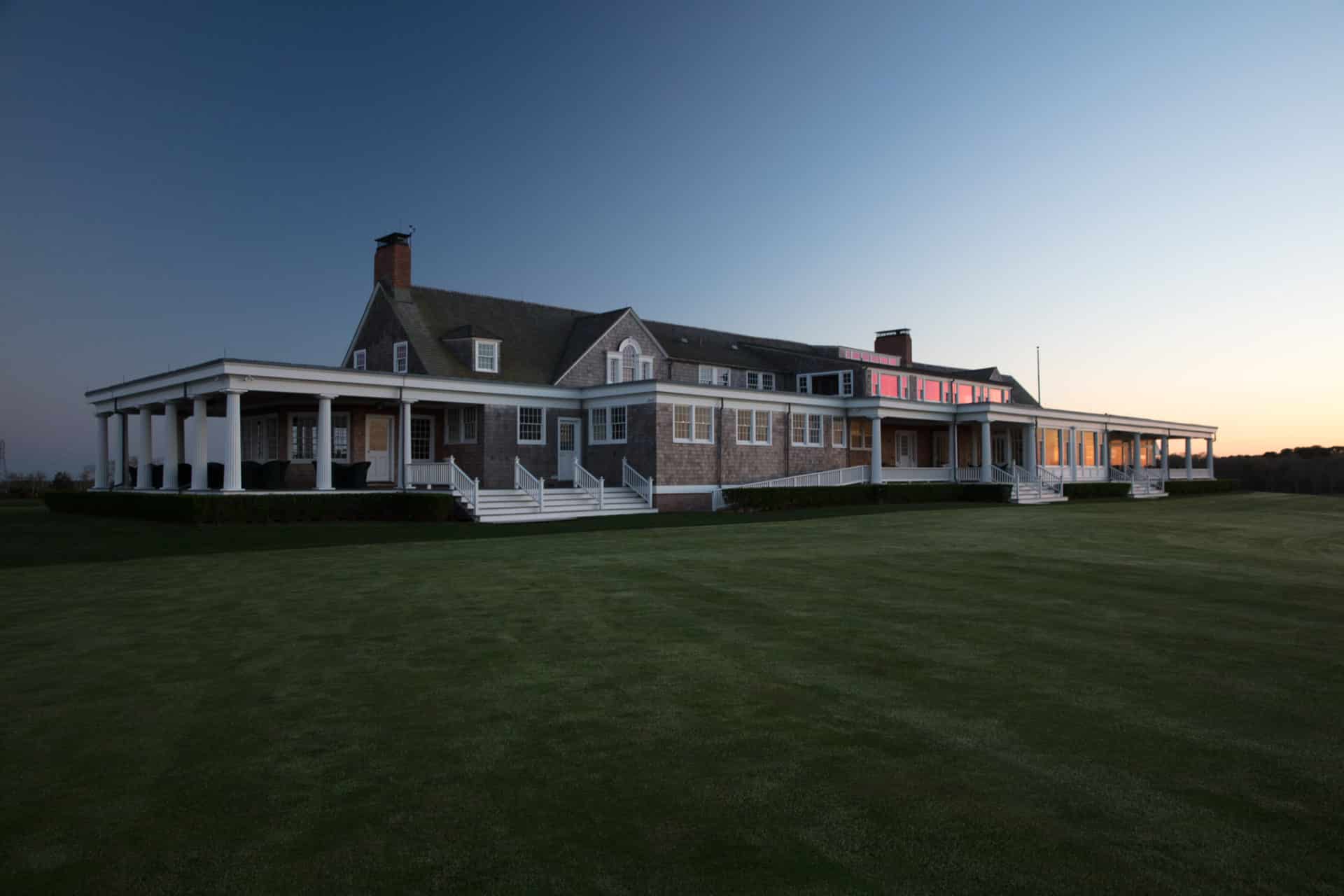 In 1891, one hundred and fifty Shinnecock tribal members assisted in laying out the first 12 holes of what was to become the Shinnecock Hills Golf Club.

The place was dotted with Indian burial mounds and we left some of these intact as bunkers in front of the greens. We scraped out some of the mounds and made sand traps.

Material from the Sebonac and Woodland period villages were found in the area; including pottery and human remains that were sent to the American Museum of Natural History and Museum of the American Indian, Heye Foundation – now NMAI.

150 Shinnecocks help Willie Dunn, Scottish professional; lay out the first 12 holes of what was to become the Shinnecock Hills Golf Club. Willie Dunn said at that time,

“The place was dotted with Indian burial mounds and we left some of these intact as bunkers in front of the greens. We scraped out some of the mounds and made sand traps.”

Material from the Sebonac and Woodland period villages were found in the area, beside Sebonac road.  Pottery, human remains, and other items went to the American Museum of Natural History and Museum of the American Indian, Heye Foundation – now NMAI.

Shippen, the son of Rev. John Shippen came in fifth and was 21 years old. Oscar Bunn and John Shippen both became golf pros and taught at different golf clubs for many years. 1

Shinnecock tribal member Elmer Smith was the club’s first full-time superintendent. He became a legendary figure, famous for his grass growing genius, his probity, his decency, his way of treating everyone, caddies, and members, with the same respect. When he died in 1980, his son Peter Smith filled his father’s shoes and prepared the course for the 1985 and 1996 US Open. 2

Shinnecock’s Peter Smith, who attended Dartmouth University, took the job and continued his education at Rutgers for turf management. He prepared the Shinnecock Hills Golf Course for the 1986 and 1995 US Open. 3

Peter Smith was replaced in 1999, ending three generations and 44 years of the Smith family connection, by Mark Michaud of Pebble Beach, causing anguish in the Shinnecock Nation, which Smith served as tribal leader (as well as being a board member of Southampton Hospital). He became superintendent at the Foxwoods course in Connecticut, where he was working when he died at 47 of a heart attack in 2002. He remains the only superintendent to have prepared Shinnecock for two Opens. 3

During the 2018 U.S. Open hosted at the Shinnecock Hills Golf Course in Southampton, NY, Shinnecock tribal members protested the desecration of the hills and loss of land that once belonged to the Shinnecock Nation. 4

The Shinnecock Hills Golf Course also redesigned their logo to a stereotypical Indian.

Robin Williams of Shinnecock, while working at Nassau College, assisted in ensuring that the scholarship program provided as much aid to Shinnecock youth as possible. 1

Happy Indigenous Peoples Day!!! Please consider making a gift of any amount to support #LandBack for Shinnecock. Link in bio to the Peconic Land Trust Shinnecock Land Acquisition and Stewardship Fund. Your gift goes to a 501c3 and is tax deductible!!

Long Island is Indigenous land and always has been. Sewanhaky, or the Island of Black Shells (Long Island), is the present homeland of diverse and connected communities of Indigenous peoples who continue to honor, practice, and assert kinship to this place and each other. We honor and respect ancestors past and present as we commit to building a more equitable space for all.

In conjunction with the virtual exhibition “Indigenous History & Good Little Water Place” (link in bio) sponsored by a @humanitiesny Action Grant with support from @nehgov, Preservation Long Island was able to purchase a series of photographs by Shinnecock fine art photographer and exhibition co-curator @jeremynative. Entitled “Sacredness of Hills,” the series is based upon recurring desecrations of Indigenous burial grounds surrounding the Shinnecock tribal community in Southampton, NY. On Monday, August 13th, 2018, skeleton remains were found during residential development on Hawthorne Road in the Shinnecock Hills. The developers and homeowners contacted the Southampton Town and Suffolk County police department, who quickly disturbed the ground further for evidence of recent criminal activity.

Through Preservation Long Island’s advocacy work, we continue to support the preservation of unmarked burials and Indigenous sacred sites across Long Island. We encourage you to follow and support the important work of @gravesprotection_warriors, a group of members of the Shinnecock Nation working together to protect and preserve known and unknown burial sites on Long Island. To learn more about sacred, culturally significant, and historical Indigenous landscapes on Long Island, follow and support Jeremy Dennis’s @onthissite project.

Image: In this June 15, 2005 file photo, Shinnecock Indian Nation trustee James Eleazer, Jr., third from right, addresses the media as tribal Chairman Randy King, center and Charles Smith, left, listen outside court in Central Islip, N.Y., where King filed papers claiming tribal ownership of 3,600 acres of land in Southampton, N.Y. Members of the small Indian tribe on New York’s Long Island were celebrating with prayers and song Tuesday June 15, 2010 after receiving notification from the federal Bureau of Indian Affairs that it has been formally recognized as a tribe. (AP Photo/Ed Betz, File)( / AP)

The public is invited to visit the Afro-Indigenous Burial Ground Project kickoff this weekend while our archaeology and tribal representative partners begin mapping, surveying and studying the site. Ask questions, watch the process and reflect on the significance of this sacred site. Sylvester Manor's archivist/curator, Donnamarie Barnes, will be available to discuss the project and the history of the Burial Ground.

Parking is available at the public restrooms. Follow the wood chip pathway to the Burial Ground. COVID protocols are in place, including social distancing. Masks are recommended for anyone who is unvaccinated.

Sonquoqua was an Indian who lived at this place, and from his English name of Tom, the creek perhaps derived its name, although the common supposition is that it was derived from Thomas Benedict, one of the early inhabitants of Hashamomuk. Sonquoqua was one of the chief men of the Manhansett tribe; his name appears on the deed to Sylvester and Company for Shelter Island in 1652, as '' Sonquoequahesick. " The affix -esick, "of the brook," probably refers to his residence at Tom's Creek.

Indian Fields is a twelve hundred acre settlement site for the Montaukett Indians with evidence of occupation dating from the pre-contact Paleo-Indian period until May 1885. The area has two small ponds and bluffs that overlook the Atlantic. This terrain of rolling grassland and brush is now a Suffolk County Park.

Maria Pharoah, one of the remaining Montauketts living in Indian Fields during the 19th century, kept a diary, the only such document about the lifestyle of the Natives at the time, describes their self-sufficient, happy homesteading lifestyle — gathering, hunting, fishing, guiding sportsmen and selling crafts.

Illustration from Gaynell Stone, History and Archaeology of the Montauk

South Harbor was a 17th-century Corchaug Indian settlement of about 125 acres that was set aside by the town of Southold. But, just five years later, they were pushed again to a land known as Indian Neck across the channel.

During the early contact period of 1630 to 1650, local native people were moving all the time under the threat of the English colonists. Before being forcefully removed to South Harbor, this group of Corchaug people lived on Hogs Neck and were told to fence it in. Before Hogs neck, they were spread throughout Yennicot, now known as the town of Southold today.

The reason behind the forced removal was that the colonists claimed the Corchaug people were asked to continuously till the land for farms but failed to do so – despite the fact that Indigenous people had taught the colonists how to plant, fertilize crops, fish, and whale hunt generations before.

Today the land is largely open fields and private farmland.

Reposted from @peconiclandtrust Sugar Loaf Hill Summit — Sacred Land of Shinnecock People Protected⠀
On July 22 the Trust acquired 4.6 acres at the peak of Sugar Loaf Hill. The Trust will work closely with the Shinnecock Graves Protection Warrior Society to restore the land, remove the existing structures, and install a public trail in what will be a year-long restoration project. ⠀
Upon completion of the restoration, the Trust will petition the Town Board for approval to transfer fee title of the parcel to the Shinnecock people. This will be the first time that land within Shinnecock Hills will be returned to and repatriated by the Shinnecock Nation.⠀
Learn more about this project on our website. Link in bio.⠀
Image: View from Sugar Loaf Hill

The Southold Indian Museum opened in 1962 with a mission to study surrounding archaeology and natural history. It is owned and operated by the Incorporated Long Island Chapter of the New York State Archaeological Association. In 1990, the museum was forced to remove human remains that were on display through the efforts of Shinnecock tribal member David Bunn Martine and local Professor of history John A. Strong. In more recent years, the museum has worked towards repatriating human remains that had been in their collection for decades.