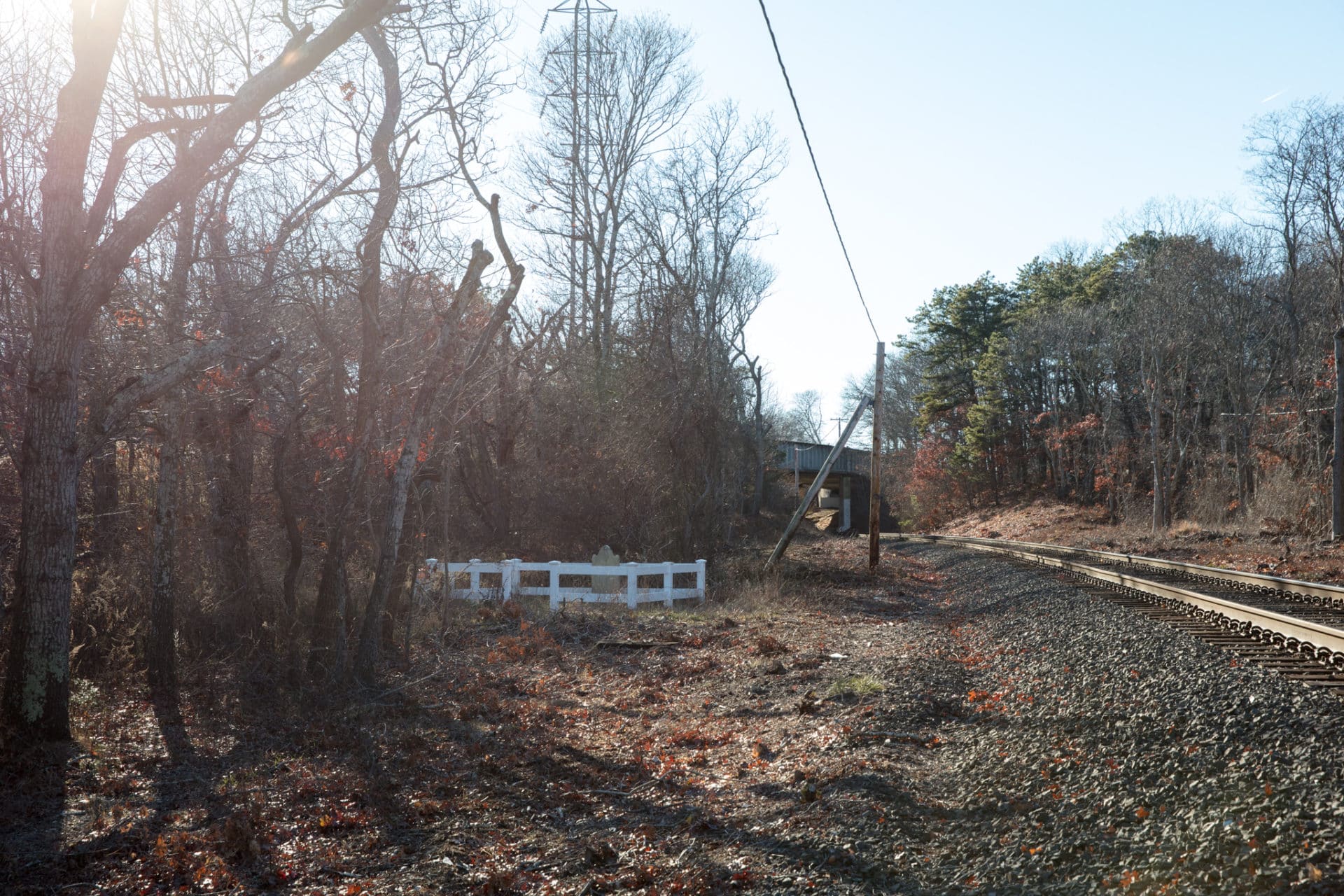 A single fenced grave marks the burial location of Reverend Paul Cuffee. This site was chosen for his burial as it was once the meeting place for the old Indian church location. It also exists within “Good Ground,” the old name of Hampton Bays.

Cuffee, a Shinnecock Indian, was a celebrated minister, like his grandfather Peter John, who preached to Indians of Long Island. Cuffee, during his youth, was an indentured servant to a Wading River farmer who then became an enthusiastic convert in his early 20s. Cuffee preached among Indian communities, including the Poospatuck Reservation (present day Mastic Beach); Canoe Place in Hampton Bays, and in the end, Montauk. These vigorous preacher’s services were attended by large crowds.

His broken grave marker reads: In testifying the Gospel of the Grace of God He finished his course with Joy on 7th of March 1812 Aged 55 years and Three Days.

Rev. Paul Cuffee left Wading River and moved to Moriches, then Poosepatuck, and finally settled at Canoe Place until his death. 1

Rev. Paul Cuffee, of Shinnecock descent, is ordained at the Poosepatuck Reservation. 2

A Congregational church, where the Reverend Paul Cuffee preached to his Shinnecock brethren, was built in 1791-1792 midway between Good Ground and Canoe Place, near the place still marked for his grave. The Trustees for the Town, who represented the Proprietors as previously mentioned, contributed twenty pounds towards the costs of the Indian church on condition that the Proprietors “shall have the grazing of Shinnecock Neck during the whole of the year 1792 without molestation.” 3

In 1798 the Rev. Paul Cuffee, a native Shinnecock Indian, received a commission from the “New-York Missionary Society,” to labor with the remnants of the Long Island Indians. In their employ he remained till his death, which occurred March 7th, 1812. The principal field of his labor was Canoe Place and Montauk. 4

March 12th – Reverend Paul Cuffee died, and was buried at Canoe Place, LI, NY, where a meeting place or the old Indian church once stood. About one mile west of Canoe Place, on the angle formed by the junction of the north and south road. 5

The church which Rev. Cuffee founded fell into disrepair before 1830, and by 1845 its site was grown up to bushes and trees. The Reverend William Benjamin was Congregational minister to the Shinnecocks at some church at Canoe Place from 1827 until his death in 1860. 6

“Paul Cuffee was also an Indian minister, a native of the Shin[n]ecoc[k] tribe, and a man of considerable powers of mind, with some eloquence, who formerly labored among the Indians of Montauk and his native tribes; and although not possessing much education, he was a useful and respectable man. He buried about a mile west of Canoe place, where the Indian church then stood, and over his grave a neat marble slab has been placed, having upon it the following inscription: ‘Erected by the Missionary Society of New York, in memory of the Rev. Paul Cuffee, an Indian of the Shinnecock tribe, who was employed by that society for the last thirteen years of his life on the eastern part of Long Island, where he labored with fidelity and success.” Died 7th March 1812, age 55 years and 3 days. 7

Two WPA(Work Progress Administration) murals by Robert Gaston Herbert (1873 – 1954)  were painted for what was originally the Suffolk Home in Yaphank, NY and is now a Suffolk County office building. One mural is a historically accurate depiction of Rev. Paul Cuffee, an Indian preacher, preaching to colonists and Indians. Each measure roughly 10’x10′. 8

Robert Gaston Herbert was active/lived in Long Island, New York and also lived in Ohio, where he was born. Robert Herbert is known for marine paintings, commercial art, wood carvings. 9

The Rev. Paul Cuffee “was the second of seven sons of Peter Cuffee, a native Indian of the Shinnecock tribe,” and grandson, on his mother’s side, of the Rev. Peter John. He was born in the town of Brookhaven, March 4th, 1757. His mother was said to be “an eminently pious woman; for many years a member of the native Indian church at Wading River.” She being of African descent, Paul was of course not of pure aboriginal blood. At an early age, he was indentured as a servant to Major Frederick Hudson, at Wading River, with whom he laboured, principally on the farm, until the age of 21 years. “During his minority he is said to have been exceedingly thoughtless, and much addicted to the pleasures of the revel and the midnight dance. Possessing a great degree of Indian cunning, with a bright and lively imagination, and being distinguished by his native powers of mimickry, he was selected as the favorite leader of a thoughtless band.”

But though thus eagerly bent on his career of folly, the Lord had marked him as “a chosen vessel, to bear his name before the gentiles” – the remnants of his own once pegan tribes. During a season of religious awakening, in the year 1778-9, being the last year of his minority, his attention was called up to the great concern of salvation. His convictions were deep and pungent, and finally became “so intense and overwhelming, that like Saul of Tarsus, he fell to the ground, and for a time his entire physical strength was prostrated. But he soon obtained a delightful relief, in an entire surrender of his heart to the Lord Jesus, and an unreserved consecration to his service.”

From the first moment of his deliverance from the load of conscious guilt, he appears to have been inspired with an ardent desire to labour, for the advancement of the divine glory, and the salvation of his fellow men. Though possessed of a very limited education, he early commended preaching; upon what authority – whether by the approbation of the church at Wading River, of which he had been admitted as a member, or by a license of a higher ecclesiastical body, is not known. “Soon after completing his term of service, he removed from Wading River to Morches, where he remained about two years;” and thence, to Poosepatuck, where in 1790, he was “ordained to the work of the ministry by a council of ministers from the Connecticut Convention.” He afterwards removed to Canoe place, which continued to be his residence till death.

In 1798, he received a commission, from the “New York Missionary Society,” to labour with the remnants of the Long Island Indians, in whose employ he continued until his death, and annually received a liberal compensation. The principal field of his labour was Montauk and Canoe Place; though he occasionally visited Poosepatuck and Islip, where there were then a few scatted remnants of the native tribes. 1