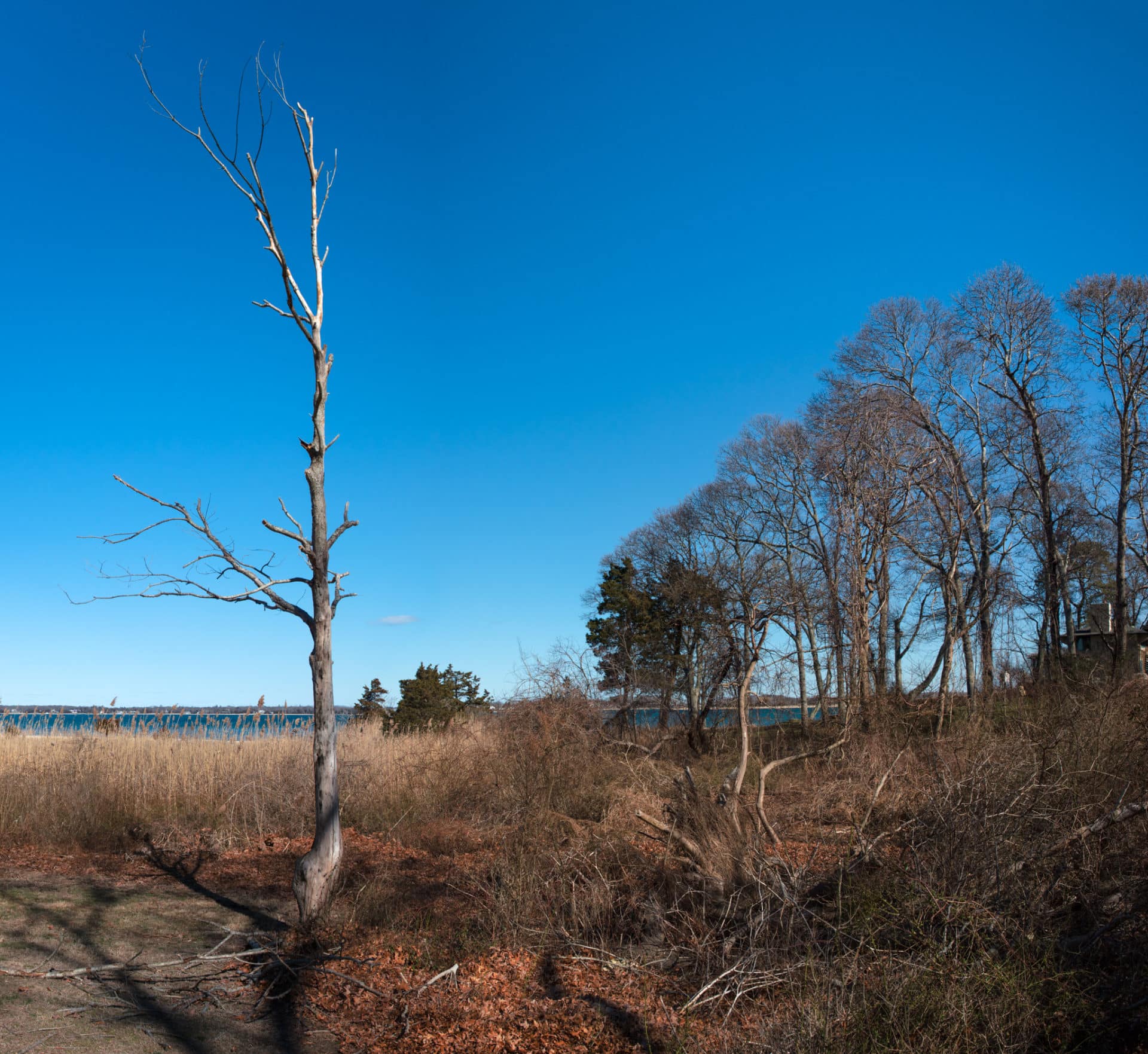 Noyack was once a village site with evidence of dwellings, burials, cooking hearths, animal remains, and tools. Evidence of both Niantic culture and Sebonic culture are found in the area.

Noyack takes its name from the long point or neck of land now known as Jessup’s Neck, at one time called “Farrington’s Point.” 1

The site was chosen as a settlement site as it is located in a rich fish and game region. Shellfish, crabs, eels, and other fishes were also abundant. Whales were stranded on the ocean beach a few miles to the south and were used for food. Ground-nuts and other edible vegetation were likewise common in the region.

Both the Sebonac Cultural people from Long Island and Niantic from New England occupied the site during the same period of occupation, with the Niantic appearing while the Sebonac were residing there. The cultures were identified by the separate pit characteristics and objects found.

No burials were found in the area during excavation until years after the excavation, found through residential development. The skeleton of a dog was also found with a long slender bone awl between the ribs. The pin is interpreted as being used to hold together wrappings surrounding the dog, or an instrument to cause the death of the dog.

The lower east side of the site was formerly cultivated as a cornfield. A complete bone fishhook was found in that area, later to be collected in the artifact collection of William Wallace Tooker.

In prehistoric times, the site was occupied for a long period, but apparently vacant as the first white settlers arrived. 1

The name and word Noyack first appears in 1668 to describe the land;

“At a meeting of the nebours of the North Sea have granted to Mr. John Jennings that he shall (have) liberty to fence in a peice of the North side of Noyack river,” 2

“that Mr. Obadiah Rogers shall have the stream at Noyak to set a fulling mill upon” 3

Bone awls were common in the shallow holes used to cook food. It is suggested that the awls were employed to pick up hot baked quahogs from the valves, as well as other hot foods, such as crab meat.

Niantic cultural presence (from New England), was stronger here than on most of the eastern Long Island sites.

Evidence of Sebonac cultural settlements were found on higher elevations, recognized as summer season occupation. Among the artifacts were remains of whelks, crabs, and summer species of fish.

The most abundant winter food was the hard shell or quahog clam, with the soft shell clam second. Two mollusk species, usually rare on eastern Long Island were found around the Noyack area.

Among the western border of the site was a shell midden, mostly containing shell fragments and occasionally Niantic pottery sherds.

Archaic origin projectile points were also found in the area. 1

A small six by six Niantic pot was found during a 1928 excavation by the Long Island Chapter of the N.Y.S.A.A. After leaving and returning in a one week period, the pottery had disappeared and was lost. 1

According to Tooker, the name Noyac may be translated to “a point or corner of land” from Massachusett Naiag. 1

“I may be permitted to suggest that nai, ‘having corners,‘ and naiag or naiyag (as Eliot writes the word), ‘a corner‘ or ‘angle,’ gave the name to many points of land on the sea-coast and rivers of New England, e.g., Nayatt Point in Barrington, Mass., Nayack in Southampton, L.I…”