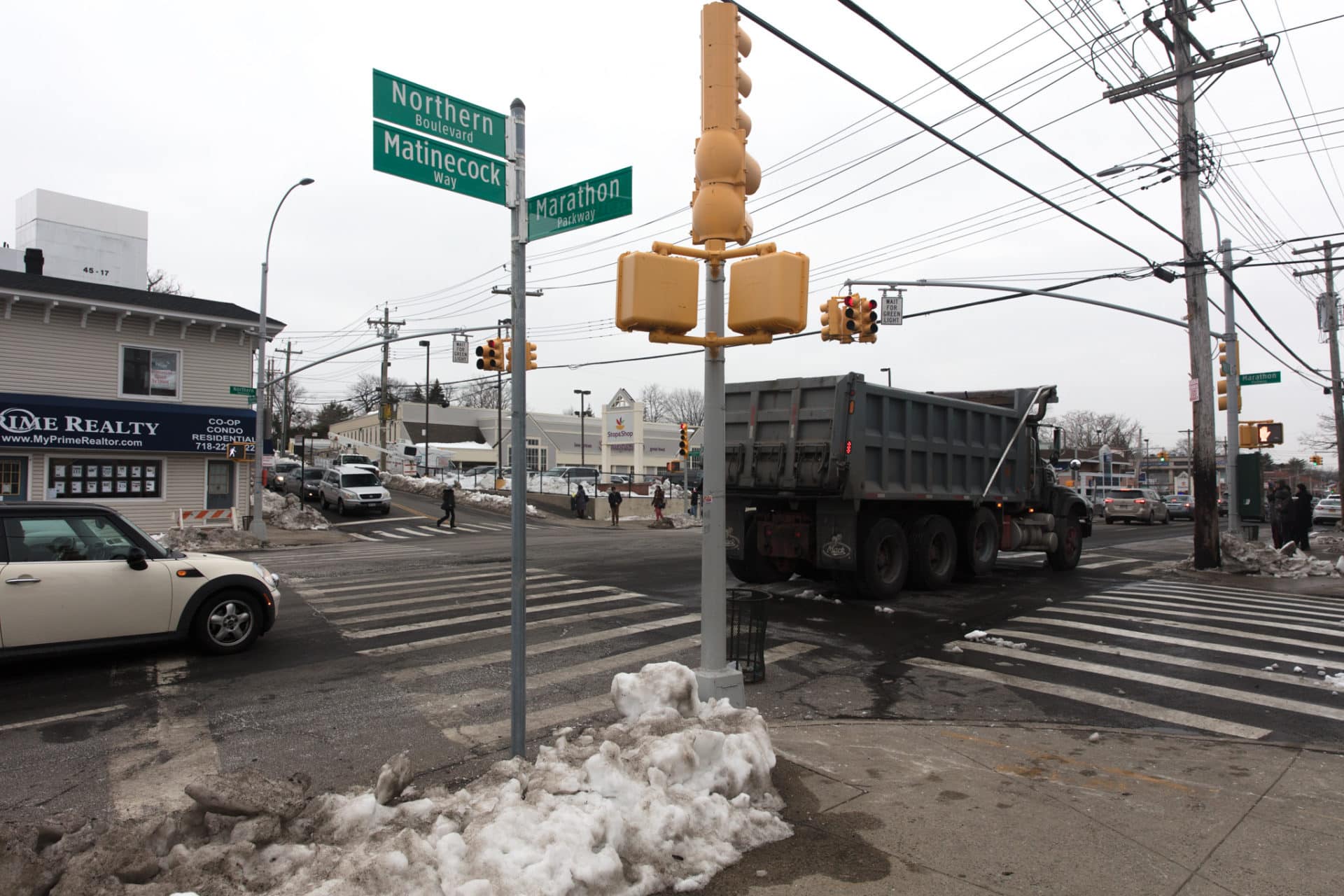 Matinecock Way is a street co-named in 2015 to honor the Matinecock Indian Tribe who once lived in villages throughout the towns of Flushing, Pomonok, College Point, Whitestone, Bayside, Douglaston, and Little Neck. The naming ceremony was attended by local members of the Matinecock tribe,  Assemblyman Edward Braunstein, and historian Jason D. Antos.

The street marker is located on the corner of Northern Boulevard and Marathon Parkway.

On October 5th, 2015, the Matinecock Way street marker was unveiled. The Queens Gazette 1 describes the event;

Councilman Paul A. Vallone hosted a street co-naming ceremony in honor of the Matinecock Native Americans. The Matinecock Native Americans are a branch of the Algonquin Nation who once lived in villages where Flushing, Pomonok, College Point, Whitestone, Bayside, Douglaston, Little Neck are now located. The last of the Matinecock tribe was driven from Little Neck and Douglaston, and graves of the tribe were discovered at Northern Boulevard.

Vallone unveiled Northern Boulevard and Marathon Parkway in Little Neck as Matinecock Way on Monday, October 5. “Today and every day we stand in solidarity with the Matinecock Native Americans and the Douglaston/Little Neck communities,” said Vallone. “The Matinecock Native Americans have stood and watched over these lands long before the earliest settlers over 375 years ago. Today we honor their legacy as a noble and harmonious people who remain our neighbors and descendants for a long and proud history.”

“I am honored to participate in the street co-naming of Matinecock Way,” said Assemblyman Edward C. Braunstein (DBayside). “Long before the arrival of Europeans, the Matinecock Tribe called the areas of what is now Douglaston and Little Neck home. Co-naming the street, at the corner of Northern Boulevard and Marathon Parkway, formerly the location of a Matinecock burial ground, is one small way to pay tribute to the Native Americans who came before us.”

“Today is a great day for the Baron and Waters families and for the history of Queens. With this co-naming, future generations will be able to learn who the Matinecock are, their importance to the origins of our beloved Queens Borough and the vital historical significance of this very spot on which we are gathered here today. For it was here that the Matinecock had their final stand in what was known as ‘The Battle of Madnam’s Neck.’ And now, more than three centuries later, this place will no longer serve only as a painful reminder of their downfall but as an everlasting tribute to their legacy,” said historian Jason D. Antos.
“The Friends of the Douglaston/Little Neck Community Library congratulate the Matinecock and other First Nations of Queens and Long Island on the Matinecock Way street co-naming on this historic occasion. We also thank Council Member Vallone, Assembly Member Braunstein, Bayside Historical Society, Community Board 11, and all of the other community partners that helped make possible this important step toward full recognition of the ongoing, centuries-old contributions of Little Neck’s Matinecock community. We are proud to be a part of this wonderful event,” said Arline Abdalian, President of Friends of the Douglaston/Little Neck Community Library.