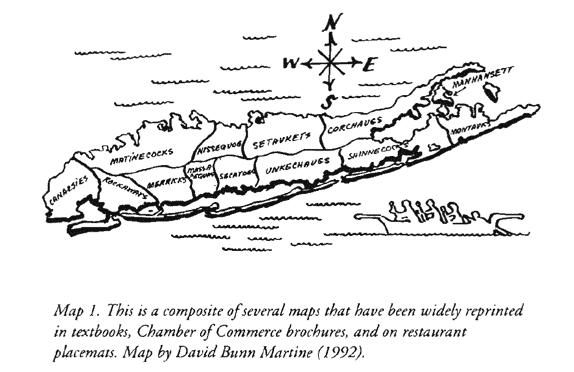 There were probably no Native peoples living in tribal systems on Long Island until the Europeans Arrived. Three tribal systems were developed later in response to the pressures from the expanding European communities.

No permanent social structure existed beyond these linguistic and kinship systems. On occasion, several villages might form temporary alliances to accomplish a limited goal, such as a military alliance against a common enemy or a large hunting expedition, but once the goal was reached, or hopelessly frustrated, the alliance quickly dissolved. Fears of “Indian conspiracies” frequently resulted in widespread hysteria during the latter half of the seventeenth century, but few of these military alliances ever posed a threat to the colonists. Shared religious ceremonies, which drew groups from some distance to a host village, were often viewed with great fear by some whites who suspected that a “confederacy” was being formed. The most common pattern of indigenous life on Long Island prior to the intervention of the whites was the autonomous village linked by kinship to its neighbors.[1. Strong, J. (1992). The Thirteen Tribes of Long Island – The History of a Myth (Vol. 9). Hudson Valley Regional Review.]